Four years after a massive mosaic looted from warn-torn Syria was first confiscated, its trafficker has been indicted in federal court. It’s not much of a charge for so bold a crime; just one count of entry of goods falsely classified, which he has admitted doing already.

The mosaic is 18 feet long, eight feet high and weighs one ton.  It depicts Hercules, the skin of the Nemean lion draped over his left arm, his club on the ground next to him, on his 11th Labour, stealing the golden apples of the Hesperides. In this scene he is shooting an arrow at the eagle coming to feast upon Prometheus’ endlessly regenerating liver. It is believed to date to the 3rd or 4th century A.D. and the style is consistent with mosaics found in Idlib, a city in northwest Syria near the border with Turkey. 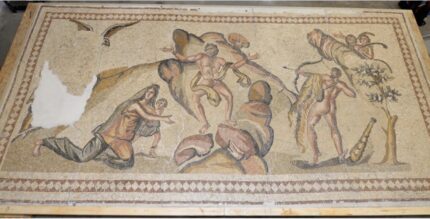 The FBI seized the mosaic in 2016 in the home of Mohamad Yassin Alcharihi in Palmdale, California, as part of an investigation into looted antiquities. He had imported it through Long Beach in 2015 along with two other mosaics and 81 vases. The paperwork declared the mosaics to be “ceramic tiles” and the entire shipment, mosaics and modern vases, to have been been acquired in Define-Hatay, Turkey, and to be worth a total of $2,199. The raid on his house turned up another ginned up document which even more ridiculously claimed he had bought the mosaic rolled up like a carpet in a 2009 yard sale from a family who had owned it since the 1970s.

Alcharihi admitted to authorities that he had paid $12,000 for the objects and lied on the form to dodge duties. He also admitted that he knew the mosaic was ancient, not a vague assortment of “ceramic tiles.” The feds found emails from him to a potential buyer in which he said the mosaic had been lifted from a historical building in Idlib and which included photographs of the mosaic in situ in 2010.

In 2018, the US Attorney’s Office of Los Angeles filed an asset forfeiture complaint against the mosaic, alleging Mohamad Yassin Alcharihi had illegally imported it into the country using fraudulent documents. Only now have the slow wheels of justice ground out an indictment, meagre though it may be.