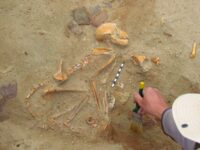 A unique pet cemetery was discovered in 2011 in the ancient city of Berenike on the Red Sea coast. It was found during an excavation of a garbage dump on the outskirts of Berenike’s early Roman port, but the animals weren’t just tossed in the trash. They were lovingly buried between the last quarter of the 1st and the first half of the 2nd century A.D. when the site was an undeveloped area between the bustling Roman port and the Ptolemaic-era military fort (3rd century B.C.).

As one might expect in Egypt, most of the animals found — 86 complete skeletons and additional bones from disturbed burials — were cats. Dogs came a distant second in popularity, with the remains of nine individuals found. Last but not least, there were four monkeys. Two of the cats were buried with an ostrich eggshell bead. Three other cats and one of the monkeys were buried wearing iron collars. Three of the cat burials were double burials with one adult and one juvenile feline. None of the complete skeletons showed signs of deliberate killing or of mummification. One dog, a sturdy molosser type likely imported from elsewhere in the empire, had fish and goat meat in his stomach and was carefully wrapped in a basket and covered with pottery fragments. These were beloved house pets, not cult offerings killed for religious purposes or random strays or working animals casually discarded after death. 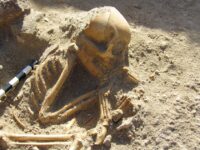 When they were first unearthed, the monkeys were believed to be an olive baboon and three grivets, both species native to Africa, but they were juveniles when they died and conclusive identification of their species from the bones was elusive. Comparative analysis of the bones and examination with 3D scanners has now revealed that the pet monkeys were in fact imported from India.

Zooarchaeologist Dr. Marta Osypińska from the Institute of Archaeology and Ethnology of the Polish Academy of Sciences in Poznań said: “This is a unique find. Until now, no one has found Indian monkeys at archaeological sites in Africa.

Dr. Osypińska said: “We knew that spices, fabrics and other commodities were imported from India. It turns out that monkeys were also imported.”

Their owners must have spent a pretty penny acquiring monkeys that had to travel by ship across the Indian Ocean, but it seems like the stress of the voyage, dietary changes and the shock of the new environment took a fatal toll on the poor creatures. They were laid to rest lovingly, resting on their sides with their paws near their heads like children. One was covered with a blanket. Another had large shells near its head.