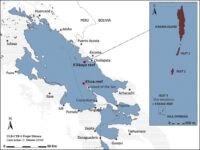 Lake Titicaca was sacred to the Inca. They believed Inti, god of the son, was born on the Isla del Sol in the southern part of the lake and that Manco Cápac, the Inca primordial ancestor, emerged from a sandstone cliff on the island. In the 15th and 16th centuries as the Inca expanded their empire, they transformed the Island of the Sun into a major ceremonial complex; the remains of more than 80 temples, shrines and other religious structures from this period have been discovered on the island. Lake Titicaca became one of the most important pilgrimage site in the Inca Empire.

Even before the Inca the lake had ritual significance to the Tiwanaku Culture (800-1000 A.D.) who made underwater offerings off the Khoa reef, northwest of the Island of the Sun. The Inca followed in their footsteps, and numerous ritually submerged artifacts have been found both from the pre-Inca and Inca era. Since 2012, the Université libre de Bruxelles has undertaken an ambitious research program to thoroughly document the sacred offerings on and around the Khoa reef and K’akaya reef to its north.

One of the objects found on the K’akaya reef is a large rectangular stone box. It was resting on the lake bed, not buried in the sediment but a thin layer of concretion at its base indicates it has not moved at all since it was deposited hundreds of years ago. The box was carved out of a single block of andesite. It was perforated in the middle of both short sides and a cavity in the center was capped with a thick andesite plug. The seal is tight, but not watertight, and inside the cavity archaeologists found compacted sediment and some small fish bones. When the intruders were removed, inside were a small figurine of a llama or alpaca and a gold sheet curled into a cylinder. The camelid figurine was made of Spondylus shell and is a stripey pinkish orange on one side, white on the other. The gold sheet is pierced in two places. Spondylus shell was just as much of a luxury good as gold, its closest source being the coast of Ecuador

This is likely an Inca-era offering. Twenty-eight  stone offering boxes have been found on the Khoa reef, but only four had surviving contents.  Those four contained camelid figurines made of gold, silver and shell. The K’akaya box is made of the same andesite stone as the Khoa boxes and the cut and polish techniques are the same, but the newly-discovered is unique in shape. The Khoa boxes are usually cube shaped and have square caps. Some are cylindrical. None are rectangular with a circular plug.

The artifacts reside with the Bolivian municipality of Escoma, which has jurisdiction over the area in which they were found.

“One of the goals of our underwater archaeological survey was to identify the existence of similar sites and to our surprise we found at least one,” said [Université libre de Bruxelles junior research fellow Christophe] Delaere. “It presents not only one of the rare intact discoveries of an Inca underwater offering, but also that it was found at another place in the lake, which has an important implication for understanding the relationship between the expanding Inca empire, the local communities who lived in the lake, and Lake Titicaca itself prior to European contact.

The study has been published in the journal Antiquity and can be read here.