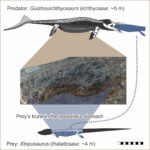 Paleontologists have discovered the fossilized remains of one dinosaur inside the stomach of another one. The predator was an example of an ichthyosaur (Guizhouichthyosaurus), a marine reptile about 16 feet long. Its prey was a thalattosaur (Xinpusaurus xingyiensis) about 13 feet long. This is the first direct evidence of megapredation, one large animal devouring another of human size or larger. It’s also the first direct evidence of a Triassic marine reptile eating another marine reptile.

The nearly complete skeleton of the ichthyosaur was discovered in 2010 at the Ladinian (Middle Triassic) Zhuganpo Member of the Falang Formation in Xingyi, Guizhou, southwestern China, a former quarry and active paleontological site which is now part of the Xingyi National Geopark Museum. The ichthyosaur and its stomach full of thalattosaur is on display at the entrance to the museum.

Because stomach contents are rarely found in marine fossils, researchers rely on tooth and jaw shapes to learn what prehistoric species may have eaten. While prehistoric apex predators are typically thought to have large teeth with sharp cutting edges, some modern predatory species like crocodiles use blunt teeth to consume large prey items with grasping force instead of cutting. Ichthyosaurs share these blunter teeth, but with no direct evidence of large prey consumption in these prehistoric marine reptiles, scientists believed that they fed on small prey like cephalopods.

However, the discovery of the giant thalattosaur in the stomach of the ichthyosaur found by Motani, Da-Yong Jiang, a paleontologist at Peking University in China, and their team suggests that this was not the case. “Now, we can seriously consider that they were eating big animals, even when they had grasping teeth,” says Motani. “It’s been suggested before that maybe a cutting edge was not crucial, and our discovery really supports that. It’s pretty clear that this animal could process this large food item using blunt teeth.”

The articulated remains of the thalattosaur’s mid-section didn’t have time to be digested by the ichthyosaur’s stomach acids, which suggests the predator died shortly after eating his last meal. There ichthyosaur’s neck appears to have been broken. There is no conclusive evidence of whether that last meal was killed or scavenged, but partial remains of the thalattosaur’s legs, which would have rotted off first, were still attached to his trunk. His tail, which would have been the last extremity to detach from the body during decomposition, was found 75 feet away from the ichthyosaur fossil. This suggests the tail was ripped off first in an attack from a predator, and then the rest of the body eaten. But the hunted may have taken his revenge on the hunter after all.

“The prey is lighter than the predator but its resistance must have been fierce,” Motani said. “The predator probably damaged its neck to some extent while subduing the prey. Then it took the head and tail of the prey off through jerking and twisting, and swallowed the trunk using inertia and gravity.”

Motani added, “These activities may have expanded the damage of the neck to the point it was fatal. The neck vertebral columns of these ichthyosaurs are quite narrow and once they could not hold the skull in place anymore, the predator could not breathe. Soon, it died not far from the site of the predation, where the detached tail of the prey lay.”

The study has been published in the journal iScience and can be read in its entirety here.