A marble block carved with a relief of Actaeon being devoured by his hunting dogs has been unearthed at the Roman theater in the ancient city of Prusias ad Hypium in modern-day Konuralp, northwestern Turkey. The Actaeon block was discovered in the orchestra of the ancient theater along with many other highly decorated architectural fragments such as entablatures that were once part of the stage structure.

In the myth Artemis transforms Actaeon into a stag to punish him for having seen her bathing naked. She sets his pack of 50 loyal dogs on him and no longer able to recognize him as their master, they tear him apart. The relief depicts Actaeon still in human form being devoured by three dogs. Acanthus leaves decorate the scene which is surrounded by an egg-and-dart border.

Other remarkable finds are the superstructure blocks belonging to the stage building with tragedy, comedy, and drama masks, similar to which have been found in the same area before, and the structure blocks with floral decorations.

The pieces are similar is some detail, particularly border motifs, to a large block found at the theater in 2020 whose central relief is a head of the gorgon Medusa.

Prusias ad Hypium was founded as “Hypios” in the 4th century B.C. by settlers from Heraclea Pontica, a prosperous center of trade on the coast of Bithynia. It was conquered by King Prusias I of Bithynia in the early 3rd century B.C. and renamed the city after itself. The first theater was built around this time. The city was part of the great bequest of the entire kingdom of Bithynia by Nicomedes IV to the Roman Republic in 74 B.C. Rome added the “ad Hypium” to the name and over the next two centuries Prusias ad Hypium grew in population and wealth. It was granted the right to mint coins and no fewer than three Roman emperors, (Hadrian, Caracalla and Elagabalus) visited it in person in the 2nd and 3rd centuries.

Archaeologists have begun cleaning and conserving the newly-discovered blocks from the orchestra section of the theater. Some of the blocks awaiting treatment will be kept in the archaeological park for visitors to see. 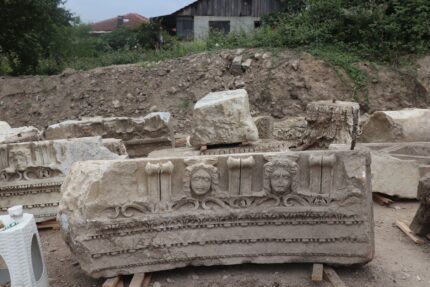 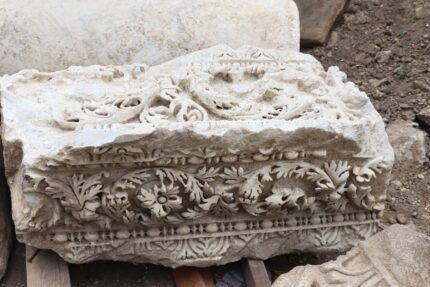