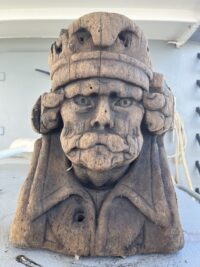 Fishermen casting their nets off the coast of the Wadden Islands, Texel, the Netherlands, hauled in not the delicious shellfish they expected, but a carved wooden head in exceptional condition. The crew of the shrimp cutter Wieringer 22 caught the sculpture on Tuesday, August 2. They named the head Barry and posted him on social media where he garnered an instant following.

Acting on advice from archaeologists, the crew placed the head in an eel tub filled with sea water to keep the wood from drying out and deteriorating while the ship was still out shrimping. On Thursday, August 4, the Wieringer 22 came into port where it was greeted by excited archaeologists.

The head is made of oak, which would under normal circumstances be susceptible to the depredations of shipworm, but the sculpture managed to avoid this fate by embedding itself in the sea floor after the wreck. The sediment prevented marine organisms from making a meal of the figurehead and kept it from rotting away. That coincidence is the only reason it is in such impeccable condition.

Michiel Bartels, a municipal archaeologist for that region of the Netherlands, told the Leeuwarder Courant that he believed the “very special discovery” came from a warship, possibly during the Eighty Years’ War, which stretched from the mid-1500s to the mid-1600s.

Bartels told the outlet that the man in the carving was wearing a specific kind of headgear called a Phrygian cap. “This hat symbolizes freedom and independence,” he said. “The Phyrigians were enslaved by the Romans. Slaves were shaved bald. When released from slavery, [Phyrigians] wore a cap to hide their baldness and signify their freedom. During the Eighty Years’ War, the symbol came back as a sign of independence.”

Experts believe that Barry – as the crew members called the figure – adorned the stern of the 17th-century ship. “The most important thing is to conserve the sculpture and examine it,” says Ad Geerdink, director of the Westfries Museum. – Many ships from the Dutch East India Company (VOC) rest at the bottom of the Wadden Sea. It is too early to say what kind of unit the sculpture is from. Figures of this type, placed at the stern of ships, were to impress and speak about the origin of the vessel. It was such a frenzy at sea. And this figure fits well with this habit.

The hat could lead researchers in another direction, away from the political symbolism of the 80 Years’ War and towards a profession: whaling. The 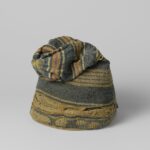 Rijksmuseum has a similar woolen cap in its collection. It was one of many discovered in the graves of 185 Dutch whalers and whale oil workers in the Spitsbergen archipelago in Norway. The caps not only kept the sailors and workers warm in the frigid climate, but were markers of identity, each knitted in different colors and patterns. The connection between man and hat was so pronounced not even death could sever it, and many of the Dutchmen were buried wearing their hats.