The large Roman complex with a unique never-seen-before layout unearthed in Scarborough, North Yorkshire, last year has been reburied for its own protection. It was discovered in an archaeological survey at the site of a new housing development. The complex includes a circular central room with four rectangular rooms leading off it in a rough cross shape. There are also a bath house and other outbuildings. It may have been a villa or a religious building, or both at different times, but whatever its purpose, the quality of design and construction are so high it could only have been the handiwork of the top architects and craftsmen in Northern Europe. 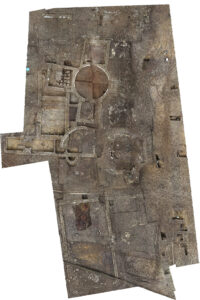 When the find was first revealed, housing developers Keepmoat had already redesigned the project to move a planned open greenspace to the archaeological site. That way construction could continue around it without disturbing the Roman remains. Keepmoat was in discussions with Historic England about how best to manage the site for the long term as well. They planned to apply for designation as a national historic monument and to integrate it into the public open space of the development in such a way as to protect it while still making it accessible to the public.

Unfortunately time was not on their side. As soon as the find was announced, the remains proved vulnerable to predators. The fenced-in site was broken into by “nighthawks” (illegal metal detectorists who operate under cover of darkness) literally hours after the story hit the press on April 14th. Thankfully the damage was mostly to the fence and land around it, not to the ancient structures, and Keepmoat increased security in response.

More than a year has passed since then, and following Historic England’s recommendation, Keepmoat has now reburied the archaeological remains. They do plan to do something on the greenspace to explain the ancient treasure beneath its topsoil.

A Keepmoat spokesperson said: “To inform visitors of the significance of the findings, we have submitted a landscaping design to the Local Planning Authority which will incorporate an interpretive depiction of the remains.”