The Archaeological Survey of India (ASI) has discovered a burial urn containing a gold diadem and numerous iron objects at the Adichanallur archaeological site in Tamil Nadu, India. The diadem was found in a massive earthenware urn eight feet in diameter. The urn was filled with soil, and the diadem was at the bottom of the urn along with a complete skeleton and other grave goods.

[T]he urn contained a number of objects that were made of gold, bronze or iron. As many as 20 iron objects — two inside and 18 outside the urn burial — were unearthed. On the outside, it contained 11 arrow heads, two spear heads, one hanger, an iron plate, a chisel and a long spear of 1.75 metre with a decorated handle.

The bronze objects included a circular sieve, a cup with a stand, and two bowls. Interestingly, the cup had a moulded decoration. The urn also had a number of pots, and red and black earthen wares of varying sizes. As per the ASI expert, the urn also contained paddy husks.

Clay jar burials were first encountered at Adichanallur in 2004. So far 169 urns containing human skeletal remains and rich grave goods have been unearthed at the site. Radiocarbon dating of the human remains revealed that they were buried between 905 and 696 B.C.

Scottish archaeologist Alexander Rea, the first Superintendent of Archaeological Survey of Southern India, found numerous gold artifacts, including 20 diadems, in his excavations of Adichanallur between 1899 and 1905. He documented the find site of the diadems with meticulous detail in his 1902 excavation report.

This year the ASI surveyed the area pinpointed by Rea in the 1902 report with satellite mapping before excavating in the hope they might expand on Rea’s exploration and find any archaeological treasures he missed. The burial urn containing the diadem was discovered 27 days after digging commenced.

The diadem doesn’t look like one anymore. It has been repeatedly folded up leaving it just 3.5 cm (1.4 inches) long. This was done deliberately, a ritual destruction of the diadem after the death of the wearer so that nobody would be able to wear it after him. 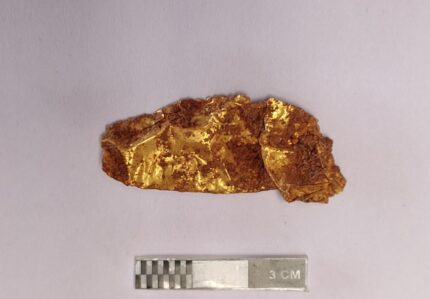