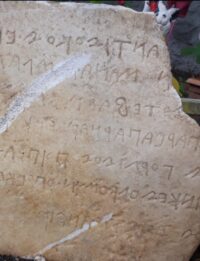 An inscription bearing the name of the Phrygian capital of Gordion has been discovered in the remains of the ancient city about 40 miles southwest of Turkey’s capital, Ankara. The name is known from ancient sources, but this is the first inscription ever found to mention the name “Gordion.”

Gordion was the capital of the kingdom of Phrygia which ruled Western Anatolia area from the 12th century B.C. until the Persian conquest in the 7th century B.C. According to legends cited by ancient historians like Herodotus and Arrian, Gordion was founded by Gordios, maker of the intractable knot that Alexander the Great “untied” so handily by slicing through it. Gordios’ son and successor was the King Midas who turned everything he touched into gold. They were already legendary figures by the time of Homer, but the archaeology of the site indicates it was part of the Hittite Empire in the Bronze Age, not an independent kingdom.

A historical King Gordios succeeded by his son King Midas do make an appearance in the 8th century. The historical Midas built what would become known as the Midas Mound Tumulus in around 740 B.C. for his father Gordios. At 180 feet high and almost 1,000 feet in diameter, it is the second-largest burial mound in Turkey. It was excavated in the 1950s and its double-layer wood and limestone funerary chamber was found with rich furnishings and food offerings still intact. (A few years back, a rather tasty mead-beer hybrid was recreated from a chemical analysis of the residue inside one of the cauldrons found in the chamber.)

Gordion faded in the Hellenistic period but was still populated during the Roman period when its location on a major road lent it significance. After the 4th century, there is little evidence of occupation except for limited habitation of the citadel mound in the 13th and 14th centuries. A small village west of the citadel was the only settlement in the 19th and 20th centuries.

The ancient city was rediscovered during construction of the Berlin-Istanbul-Baghdad railroad in 1893. Archaeologists Alfred and Gustav Körte who excavated the site in 1900 were convinced it was Gordion but they never found any conclusive archaeological evidence to prove it. Subsequent archaeological explorations also came up empty-handed. Until now.

The team found a Phrygian stone inscription in the area called “the outer city” in Gordion this year. The inscription, dated to the years when Greek King Antiochus I (281-261 B.C.) reigned in the Hellenistic Period, is the first and only inscription in which the name Gordion is mentioned.

The inscription, which is thought to be related to a tumulus tomb, is also notable for being the longest inscription ever found in Gordion. It features a Persian male name, as well.

The stone is now being conserved and the inscription fully translated before publication.