Archaeologists have discovered two carved reliefs from the late Olmec period (900-400 B.C.) in Villahermosa, Tabasco, southeastern Mexico. The reliefs are carved from large round slabs of limestone 4.6 feet in diameter and weigh more than 1,500 pounds apiece. Each relief features a man wearing a headdress formed out of four corncobs, his face contorted in a grimace — mouths open and turned down, eyes wide. In the center of the headdress is an “Olmec cross,” a glyph of a jaguar that was a marker of elite status. The faces take up almost all of the real estate, bordered by footprints on the sides and arms crossed underneath. 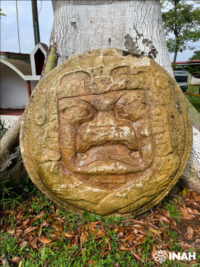 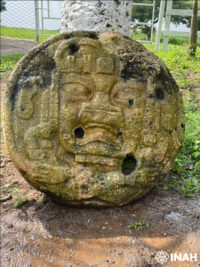 The Olmecs are the earliest known major Mesoamerican civilization. They held sway over what is now Mexico’s southern Gulf Coast region from around 1600 B.C. until their extinction (for reasons unknown) in 400 B.C. Olmec culture is most famously associated with the colossal helmeted heads carved out of massive basalt boulders. The recently-discovered reliefs have features in common with the iconic heads.

Mexico’s National Institute of Anthropology and History (INAH) was alerted to the existence of the reliefs in June 2019 by an anonymous tipster. They were in a private home in Villahermosa. After examination, INAH experts confirmed their authenticity. The homeowner said he had found them while leveling agricultural land on his farm in Tenosique.  (A very similar circular relief was found in Tenosique in 2000.) Archaeologists plan to survey the find site in hopes of narrowing down the date of the carvings.

Among the reliefs known from the late Olmec horizon (all from informal excavations), when La Venta emerged as the guiding center of the nuclear area of ​​this civilization, five of them represent figures of “contortionists”, one of which comes from Balancán and is exposed in the Regional Museum of Anthropology, in Villahermosa; another one, from Ejido Emiliano Zapata, and is in the Museum of the Archaeological Site of Pomoná; and three, from Tenosique, including the one registered in 2000 and these last two.

“The five monuments have in common the representation of large faces, possibly of local rulers, who also practiced contortionism not in a playful sense, but ritual. By adopting the position in which they appear portrayed –which reduces the irrigation and oxygenation of the blood to the brain–, the characters reached trance states in divinatory ceremonies, and that conferred powers on them.

“It is possible that these faces evolved and derived in the Mayan ajaw altars , such as those of the Caracol site, in Belize, which tells us about the permanence of this theme for more than three centuries, already for the Early Classic and Late Classic periods. (495 to 790 AD). The word ajaw means ‘he who shouts’, ‘he who commands’, ‘he who orders’; and in these Mayan monuments the mouth stands out, a feature that must come from Olmec times, especially from these circular reliefs of ‘contortionists’ that are portraits of local chiefs”.

The reliefs will be transferred to the Museum of the Archaeological Site of Pomoná in Tenosique, which will then become home to the lion’s share of Olmec “contortionist” reliefs.