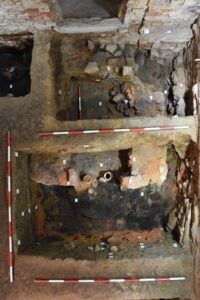 The remains of a well-preserved medieval kitchen fully stocked with clean cookware have been discovered in the town of Nový Jičín, northern Moravia, Czech Republic. The kitchen was found under a private home adjacent to the northern side of the town’s historic walls in an archaeological survey before renovation. It dates to the early 15th century.

Based on its location, [Pavel Stabrava from the local Novojičín Museum] believes that the house would most likely have belonged to a burgher family, a social class equivalent to the medieval bourgeoisie.

“Since the house was located near the town walls, this would have been a less wealthy burgher family. The richest burghers would have lived in so-called ‘beer court’ houses around the town square.”

The stone foundations of a log house were uncovered beneath the paved courtyard of the Renaissance-era floor in the back of the house.  Within the area bounded by the foundations were the charred remains of a wooden

floor. In one corner of the room was a brick oven with a raised hearth. On the hearth was a full set of cookware, complete with lids, and a wooden spatula. The dishes had been washed and put up to dry on the hearth. On the wooden floor near the furnace, archaeologists also found an iron grate, deformed by a much hotter fire than the kind food was cooked over, plus hundreds of glass beads from a necklace, a padlock, a three-tined pitchfork and a spearhead.

The find is exceptionally rare, because city houses were renovated and rebuilt many times over the centuries, and the construction of modern utility infrastructure typically destroyed any remains of earlier townhomes under the ground. It’s a total fluke that this one kitchen survived at all, let alone in virtually untouched condition.

The charred wood floor remains are evidence that the original medieval house was destroyed by fire, possibly in 1427 when the city was burned by Hussite forces in the Fourth Crusade of the Hussite Wars. The Hussites besieged Nový Jičín and overran it, burning the wooden buildings and massacring civilians. The kitchen and its clean cookware were probably hastily abandoned by the homeowners fleeing for their lives.

The artefacts are now in the process of conservation, after which they will be stored in the depositories of the Novojičín Museum. Pavel Stabrava hopes that further planned excavations around the exterior of the house will reveal more about the medieval town and its inhabitants. 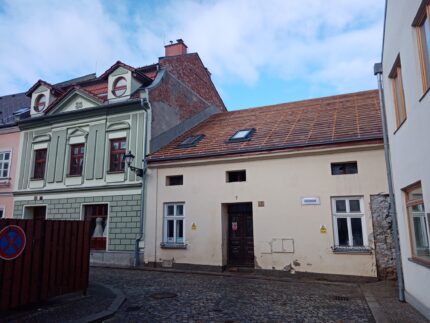