Two years ago, John and his sons were looking for blackberries in Oskaloosa, Iowa when the boys saw a round object they thought was a ball in a creek below a wooded area on their property. Upon closer inspection, John noticed that the “ball” had a marrow line around the edge which meant that it was not a plaything, but rather a part of a very large bone.

The family dug up the bone and found it was a four-foot-long femur. Peep the Flintstones-like visual of John carrying the huge thigh bone: 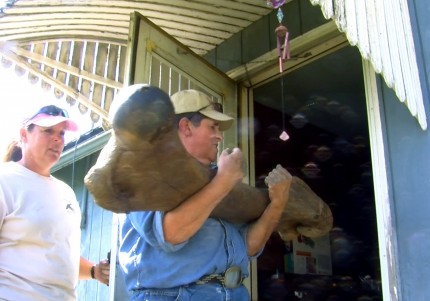 The family continued to dig on the site for the next two years, discovering several enormous vertebrae and ribs which they kept in the living room, shifting them to make space whenever they found a new bone. They only told a few trusted people about their new pet and only alerted experts last month when they brought the bones to the University of Iowa for identification. Paleontologists confirmed that they were the bones of a mammoth and therefore at least 12,000 years old which is when mammoths went extinct after the end of the last ice age. They could be as much as 100,000 years old, but they haven’t been dated yet.

Mammoth fossils are fairly common in Iowa, but it is rare to find so many bones, large and small, from a single mammoth in one place. Usually they are found individually, scattered by time, development, predators, etc. This mammoth appears to be whole and undisturbed.

Holmes Semken, professor emeritus of Geoscience at the University of Iowa, intrigued by the number of bones found, organized a team of volunteers from UI and Iowa State to do a full archaeological excavation of the remains. So far they have found small feet bones, floating ribs two and a half feet long and thoracic ribs four feet long. Scientists will continue to dig all summer. They expect to find the head within the next few weeks and will scan the dig site with ground penetrating radar to confirm whether the skull and everything else is under there waiting for them.

The researchers are particularly excited to collect pollen and other plant remains which will give them much insight into the biology of the area 12,000+ years ago. According to Iowa law, bones are and will remain the property of the family, who are continuing to keep their last name and precise location under wraps to keep nosy people and thieves from messing with their mammoth.

As for what John intends to do with the complete skeleton of a mammoth, he’s not certain yet. He jokes in the news story about building an addition to his house big enough to keep the mounted skeleton of a giant mammoth, but it’s better than moving them around his living room. Donating them to a museum sadly doesn’t get a mention.