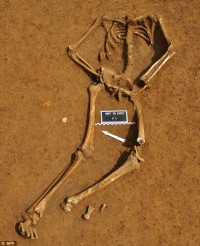 Last Friday, June 8th, Belgian archaeologists unearthed the skeletal remains of a soldier killed during the Battle of Waterloo on June 18, 1815. Buried under just 15 inches of soil, the position of the skeleton suggests the young man died where he fell and was hastily covered with a thin layer of dirt, probably by his comrades. This is a very rare find. The victorious armies cleared the battlefield of their dead, and the defeated French were eventually buried on site in mass graves. It’s the first time in a century that a body from the Napoleonic wars has been found on a Belgian battlefield, and this one is almost entirely undisturbed.

Waterloo was part of the United Kingdom of the Netherlands in 1815, which is why there is a man-made conical hill called the Lion Mound memorializing the spot where the Prince of Orange, heir to the Dutch throne, was hit in the shoulder by a musket ball during the Battle of Waterloo. The soldier’s body was discovered in the shadow of the Lion Mound.

Unfortunately his skull was destroyed by mechanical diggers prepping the area for the upcoming demolition and re-construction of the visitor’s center, shops, hotels and parking lots. The Ministry of Archaeology for the region of Walloon Brabant took over and excavated the rest of the skeleton, finding it almost complete. Only the skull, one foot and some hand bones are missing.

The body was spared any Thénardier-style looting. Coins were found in his pocket, one of them a half franc from 1811, the others too corroded to identify immediately. Experts are cleaning them now. He was also carrying a flint and a small red sphere in his right pocket. Next to his body were discovered a spoon and an unidentified wooden object, possibly a rifle butt, with the initials “C.B.” carved into it.

His uniform has rotted away but his leather epaulets survived. Archaeologists are hoping they will be able to identify the soldier’s regiment from the epaulets, and possibly from the spoon if it’s army-issue. If they can discover his regiment, they’ll probably be able to find his name on the combatant records. The initial analysis of the bones indicates that he was around 20 years old, 5’1″ tall and had abrasion grooves on his molars from tearing opening gunpowder tubules with his teeth.

One particularly poignant artifact was a musket ball found inside the soldier’s ribcage. This is probably the smoking gun, as it were: he took a bullet to the chest, then either retreated or was carried by comrades 100 yards or so behind the front line. The location of his burial was 100 meters (109 yards) behind the British front line, close to the Duke of Wellington’s army infirmary. It’s highly unlikely that a French soldier would have fallen in this position. Although we don’t know for sure yet, the soldier was probably British.

The British cleared the field of their dead after their victory, burying them in consecrated ground. This fellow could have been overlooked because he was buried, albeit shallowly, where he died. The French dead, in contrast, remained unburied for days, their bodies robbed by locals, until they were put in mass graves and burned with quicklime. Any skeletal remains still recoverable from the mass graves were removed in subsequent decades for the grotesque practice of fertilizer production.

There is some footage of the skeleton being examined in the lab and of the battlefield in this BBC News video.