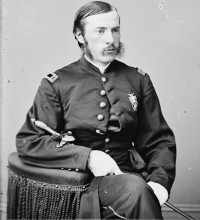 Researcher Helena Iles Papaioannou was digging through records from the Office of the Surgeon General in the National Archives when she found the 21-page report of Dr. Charles A. Leale, the first doctor to attend Abraham Lincoln in the presidential box at Ford’s Theater after he was shot by John Wilkes Booth. Leale first wrote up the events of the tragic night of April 14, 1865 the next morning, just a few hours after Lincoln’s death. He sent the report to the Surgeon General’s Office and they filed a “true copy” — an exact copy handwritten by a clerk — in their correspondence files where it remained in obscurity until now.

Papaioannou is a researcher for The Papers of Abraham Lincoln, an ambitious project started by the Abraham Lincoln Presidential Library and Museum in Springfield and the Illinois Historic Preservation Agency that aims to locate and digitize every single document written by or to Abraham Lincoln during his lifetime. Their researchers look through box after box of unrecorded papers that could include Lincoln-related documents, going as far afield as Japan in their quest.

Dr. Leale’s report was in one of hundreds of archive boxes containing incoming correspondence received by the Office of the Surgeon General between 1775 and 1959. The box was labeled “Letters Received, 1818-1889” and the report was filed under “L” for Leale. She recognized that it was an interesting document of the assassination, but she did not realize that it was the only one of its kind and had never been published before.

Other than filing the original report, Leale only shared his view of the events publicly twice in his lifetime. The first time was in July of 1867, when he sent Benjamin Butler’s Assassination Committee in the U.S. House of Representatives a cover letter and report “principally copied from (a never published) one written by me [Leale] a few hours after leaving his [Lincoln’s] death bed….” That report was never published since Butler’s aim was not so much to gather new information about the assassination, but rather to collect evidence implicating President Andrew Johnson in Lincoln’s murder. He was one of the seven prosecutors in Johnson’s subsequent impeachment trial, giving a four-hour opening statement when the trial started on March 30, 1868.

The second time was the first fully public airing of Dr. Leale’s recollections. He spoke of the assassination in a speech to the New York Commandery of the Military Order of the Loyal Legion of the United States in 1909, the 100th anniversary of Lincoln’s birth. This is the version that was published and has gone down in history as Leale’s testimony. A lot of time had passed, though, and his 1909 story embellishes his role. 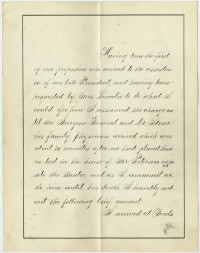 Dr. Leale’s original report, on other hand, is meticulous in documenting events in the theater and the Petersen house where Lincoln was moved as well as the medical details, the kind of document you’d expect an army doctor — Leale was in charge of the Wounded Commissioned Officers’ Ward at the United States Army General Hospital in Armory Square, Washington, D.C. — to file with the Surgeon General. Although it’s filled with the pathos and drama of that night, the report isn’t written in the sentimental melodramatic language that would become staples in later iterations.

I immediately ran to the Presidents box and as soon as the door was opened was admitted and introduced to Mrs. Lincoln when she exclaimed several times, “O Doctor, do what you can for him, do what you can!” I told her we would do all that we possibly could.

When I entered the box the ladies were very much excited. Mr. Lincoln was seated in a high backed arm-chair with his head leaning towards his right side supported by Mrs. Lincoln who was weeping bitterly. Miss Harris was near her left and behind the President.

While approaching the President I sent a gentleman for brandy and another for water.

When I reached the President he was in a state of general paralysis, his eyes were closed and he was in a profoundly comatose condition, while his breathing was intermittent and exceedingly stertorous. I placed my finger on his right radial pulse but could perceive no movement of the artery. As two gentlemen now arrived, I requested them to assist me to place him in a recumbent position, and as I held his head and shoulders, while doing this my hand came in contact with a clot of blood near his left shoulder.

Supposing that he had been stabbed there I asked a gentleman to cut his coat and shirt off from that part, to enable me if possible to check the hemorrhage which I supposed took place from the subclavian artery or some of its branches.

Before they had proceeded as far as the elbow I commenced to examine his head (as no wound near the shoulder was found) and soon passed my fingers over a large firm clot of blood situated about one inch below the superior curved line of the occipital bone.

The coagula I easily removed and passed the little finger of my left hand through the perfectly smooth opening made by the ball, and found that it had entered the encephalon.

As soon as I removed my finger a slight oozing of blood followed and his breathing became more regular and less stertorous. The brandy and water now arrived and a small quantity was placed in his mouth, which passed into his stomach where it was retained.

Read a transcript of the entire report in this pdf file. Scroll almost all the way down this page to see each page of the report scanned in high resolution, courtesy of The Papers of Abraham Lincoln’s laudable commitment to digitization.