Gerardo Boto, professor of Medieval Art History at the University of Girona in Catalonia, Spain, was leafing through the July-August issue of Architectural Digest France in 2010 when he was astonished to see what looked very much like a medieval Romanesque cloister bordering the swimming pool of a 22-hectare estate in Palamos on the Costa Brava in northeastern Spain. The estate, named Mas del Vent (“House of the Wind”), belongs to German pharmaceutical billionaire Curt Engelhorn, one of the world’s 50 richest people, but he doesn’t live there. The estate is available for rent, in fact, but despite that, the Engelhorns have been extremely reluctant to allow the pool area to be photographed. AD photographer Vincent Leroux had to beg for permission to take a picture of the dramatic gallery of arches under umbrella pines embracing the swimming pool.

Enticed by the large double-page picture, Boto attempted to secure Engelhorn’s permission to examine the structure in person, but he was repeatedly refused. Boto contacted Leroux and was able to examine his high resolution photographs in detail. He also used Google Earth to get fairly precise measurements of the gallery. His research confirmed his initial impression that the pool folly was a 12th century Romanesque cloister very similar in style to the cloister of Santo Domingo de Silos, a Benedictine monastery in the northwestern region of Castilla y León that is famous for its elaborately carved and exquisitely preserved two-story cloister built sometime in the span from the last quarter of the 11th century through the second half of the 12th century.

Like the cloister at Silos and only two other medieval Spanish monasteries, the pool cloister is composed of double columns, each carved separately, crowned with single block capitals decorated with carvings of human figures, plants and animals both real (birds, lions, wild boars) and mythological (griffins, dragons, harpies), but no religious scenes whatsoever. Boto recognized the style of the Palamos capitals as derived from two primary approaches used at Silos, the First Workshop style from around 1100 and the Second Workshop from around 1165. There is no doubt in his mind that whoever carved the Palamos capitals was very familiar with the Silos forms. 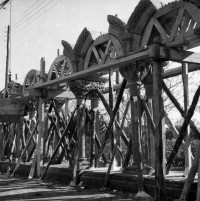 This style is very rare in the history of the Spanish Romanesque style, so even if some of the Mas del Vent cloister was a reproduction, any authentic parts at all would be a major addition to the art historical record. Thus Boto continued to research the cloister and he hit the jackpot: in the municipal archives of Palamos, he discovered pictures of the arches being assembled at the estate in 1959. From those pictures he could assess the masonry piece by piece, the weight of the stone, the erosion from centuries of elements, the incised mounting marks characteristic of Romanesque stonemasonry.

In May of this year, Boto gave a presentation of the results of his research at the Fugitive Art conference hosted by the Romanesque and Gothic art preservation organization of the University of Barcelona. Engelhorn’s representatives continued to refuse experts access to the cloister, even though they allowed anyone who could afford to pay for it to suntan underneath the columns.

Then last Tuesday the newspaper El Pais published an article about the pool cloister and broke the story wide open. All of a sudden the government, which had showed zero interest when preservation organizations pestered them to look into the cloister last year, was sending experts to assess the authenticity of the gallery, and Engelhorn’s people finally allowed the press and Boto to look at the cloister in person.

The Engelhorn family claims to have a report of inauthenticity (for real) issued in 1967 by an expert from the Metropolitan Museum of Art who made the determination after looking at some pictures. The report has not been released, and it seems odd that for years they would allow photographs of the 18th century stone farmhouse and grounds to be taken, even posted online, only refusing access to the incredibly gorgeous pool, which is always a major selling point in any real estate transaction. Even the restorer they hired to assess the cloister’s condition in 2000 had to fight with them for half a day before they’d let him take the pictures he needed to do his job. 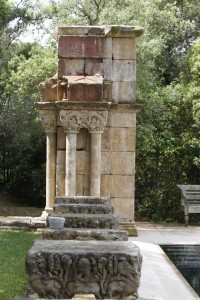 Anyway the veil is torn now. The estate management company released a statement saying that the cloister was purchased in Madrid by Hans Engelhorn, Curt’s grandfather, on July 23, 1958 for one million pesetas, big money back then but the equivalent of just 6,000 euros ($7500) today. It wasn’t originally built in Madrid, however. It was acquired by art dealer Ignacio Martínez Martínez in 1931 and brought to Madrid from parts unknown, which means this cloister has been dismantled and rebuilt at least twice in its long life.

There is also evidence on some blocks of exposure to high temperature for several days. The Ortiz family who lived on the Madrid property with the cloister from 1931 to 1958 says there was no fire during that time. According to Juan Manuel Ortiz (86), marauding militants threatened to burn it during the Spanish Civil War, but the women wept and pleaded for them to spare the cloister and it worked. 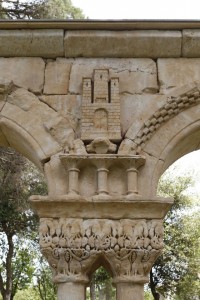 The final report of the Ministry of Culture will take some weeks to complete, but the government’s initial assessment is that the cloister is an authentic medieval structure with some modern elements, possibly from the reconstructions. Since the Engelhorns purchased it legally in 1958, even once it’s officially authenticated there’s no question of the government confiscating it or anything like that.

According to Catalan Cultural Heritage laws, the government can declare the cloister a Cultural Asset of National Interest or add it to the Catalan Cultural Heritage list. If it’s declared the former, there will be a number of prohibitions applied to keep it from being moved or sold or exported without government permission. That won’t be an issue since the Engelhorns have no interest in moving their medieval cloister. They will, however, be required to open it to the public. Their representative says they’ll comply with any such regulations.