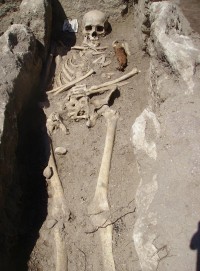 A couple of weeks ago, news broke that archaeologists in the Bulgarian Black Sea resort town of Sozopol had unearthed the skeletal remains of two men whose corpses had been stabbed with iron rods to prevent them from rising up and feasting upon the blood of the living. An iron ploughshare was still in one grave, piercing the rib cage of the would-be revenant. An iron implement was also left behind in the second skeleton but in his abdomen, which has considerably less lore-appeal, so he hasn’t gotten as much attention as the other one.

They were found buried in the necropolis of the St. Nicolas the Miracleworker monastery. (That’s according to the National Museum of History in Sofia; this article says the necropolis was outside the church of Saints Cyril and Methodius, a church very much in the public eye right now as the host of the purported bones of John the Baptist which were discovered on the island of St. Ivan in 2010. The bones have recently been dated to the first century A.D., and DNA testing confirmed that they’re all from the same Middle Eastern man. Cue the inevitable St. John hysteria.)

The skeletons date to between the 12th and 14th centuries. The fellow with the ploughshare jammed in his chest was buried near the apse of the church, an indication that he was an important figure. Iron was used to pierce the corpses of the wealthiest men while wood was used for the less wealthy, but all the people deemed to be potential vampires were powerful, influential men in life. Clerics, civic leaders, aristocrats, intellectuals: if they were cruel and abusive with their gifts when they were alive, their souls would not ascend to heaven but would remain in their rotting corpses, driving them to rise from the grave to terrorize y’all’s neighborhood.

Archaeologists have a theory about who this particular scoundrel might have been.

Bulgarian historians believe that the vampire grave most likely belong [sic] to one of the medieval mayors of Sozopol. The man’s name was Krivich, and he is known to have had a background as a pirate and bandit who exemplified evil for the town which was part of both the Bulgarian Empire and the Byzantine Empire in the Middle Ages.

“He demonstrated incompetence when defending the town from a siege. As a result, Sozopol was overrun by the Genoese who took everything away from the local residents,” [Professor Bozhidar Dimitrov, head of the Bulgarian National History Museum,] said.

I’m not sure what their grounds are for this speculation, other than the generally appropriate date (Krivich failed to protect the city from Genoese troops in the 14th century) and the plum burial spot indicating he was a man of importance, but still, medieval vampire pirate mayor …. That’s the kind of cool that cannot be denied.

The remains of 100 vampire-treated people, all of them men, all of them prominent citizens, have been found in Bulgaria. These two are the first ever discovered in Sozopol, a tiny fraction of the 700 graves unearthed in the necropolis. Most of them have been reburied, as will the Sozopol skeleton with the iron stomach. The one sporting the ploughshare in his chest, on other hand, has been sent to Sofia to go on display at the National Museum of History. It will become part of a permanent exhibit on medieval Bulgarian folklore.

It’s tourist season, you see, and vampires are big business. Already thousands of people from Germany, Britain, Russia and the US are flocking to Sozopol to catch a glimpse of a vampire skeleton in situ. Souvenir stores are stocking up on truly awful Dracula mugs and t-shirts; “vampire steaks” and “vampire cocktails” have sprung up on menus all over town. Just to pin down the cheeseball tourism trade like it’s a dead evil nobleman, Sozopol also has plans in the works to become twinned with Sighisoara, Romania, the birthplace of Vlad III, Prince of Wallachia, aka Vlad the Impaler, aka Dracula.