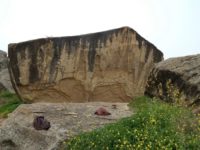 A pattern of holes cut into the floor of a rock shelter at Gobustan National Park in southwest Azerbaijan were used as a board game 4,000 years ago. Known today as 58 Holes or Hounds and Jackals, the game spread like wildfire over the ancient Middle East. A set was found in the tomb of 12th Dynasty pharaoh Amenemhat IV who died in the late 19th or early 18th century B.C. The board game carved into the rock shelter is from around that time. It can only be generally dated based on the age of the rock art outside the shelter to the second millennium B.C. when the area was occupied by nomadic cattle herders. If it can be more precisely dated to that time, then it will be the oldest 58 Holes game board known.

It was identified by Walter Crist, research associate at the American Museum of Natural History, who was looking for instances of the game in Azerbaijan last year. He had seen a photograph in a magazine of a 58 Holes game at an archaeological site near Baku, Azerbaijan’s capital, but when he arrived to examine it he discovered to his dismay that the site had been buried under a housing development. He went to Gobustan National Park, as a UNESCO World Heritage site because of its more than 6,000 rock engravings carved over 40,000 years of human occupation in the area since the last Ice Age, instead.

Park archaeologists were aware of the pattern in the rock shelter’s floor, but they didn’t know about 58 Holes. 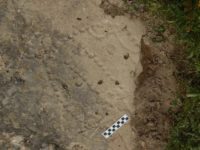 The holes are cut into the rock of the shelter in a distinctive pattern that shows how they were used, Crist said. “There is no doubt in my mind — the games played for about 1,500 years, and very regular in the way that it’s laid out,” Crist said.

Though the rules of 58 Holes are unknown, many think it was played a bit like modern backgammon, with counters, such as seeds or stones, moved around the board until they reached a goal.

“It is two rows in the middle and holes that arch around outside, and it’s always the fifth, 10th, 15th and 20th holes that are marked in some way,” Crist said of the pattern cut into the rock shelter. “And the hole on the top is a little bit larger than the other ones, and that’s usually what people think of as the goal or the endpoint of the game.”

Players may have used dice or casting sticks to regulate the movement of counters on the board, but so far, no dice have been found with any ancient game set of 58 Holes or Hounds and Jackals, he said.

Very few Western archaeologists have explored Azerbaijan’s Apsheron Peninsula and little is known about its connections to the societies of the Egypt, Mesopotamia and the Near East in the second and first millennia B.C. The discovery of the game board is more than just a new datum in the history of play; it could be evidence of far broader cultural exchange.