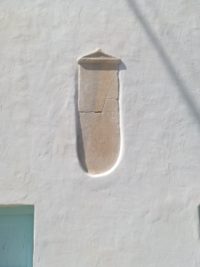 More than a century after it was lost, a 3rd century B.C. stele has been rediscovered embedded in the outer wall of a home on the island of Amorgos in the Cyclades. The Nikouria decree went missing in 1908 and many researchers have tried and failed to find it ever since. An archaeology student, Stelios Perakis, and archaeologist N. N. Fischer found the piece with the help of local residents.

French archaeologist Théophile Homolle, then director of the French School at Athens, discovered the stele in 1893 in the Panagia Church on the islet of Nikouria in northeastern Amorgos. The inscription records a response to Ptolemy II Philadelphus’ request that delegates be sent to Samos to discuss the Island League’s participation in the games and religious rites in honor of his father Ptolemy I Soter. Ptolemy, friend and general to Alexander the Great and ruler of Egypt after his death in 323 B.C., had “liberated” (really it was more of a take-over) some of the city-states of the Cyclades, restoring their ancient constitutions and repealing their taxes.

His son picked up where the father left off, expanding the Ptolemaic dominance in the Cyclades. The Island League was a political union of the Cycladic islands created by the Ptolemies to cement their influence. In the stele, the League agrees to send a mission to the sacred games held for Ptolemy in Alexandria. The Ptolemy games were also held every four years and the inscription explicitly addresses the obvious rival by stipulated that the members of the League hold the Ptolemaieia in equal importance to the Olympic games. The decree would be proclaimed in all the cities of the League. Ptolemy II would be gifted a gold crown at the cost of 1,000 staters. The stele then details how the island cities would pay for all this and names the three delegates they’d send to Samos. (The name of the third is lost.)

There’s been a lot of debate among scholars about the dating of the Nikouria decree. The first date proffered in 1895 was ca. 285-3 based on a reference to Ptolemy II’s accession to the throne, but Ptolemy didn’t conquer Samos until after his victory in the battle of Kouroupedion in 281 B.C . Later scholars shifted the range to the 260s B.C., likely 262 when the Ptolemaieia was held.

The specific stele is considered important since it provides evidence concerning the balance of power during the first half of the 3rd century BC and the transition of control from the Macedonians to the Ptolemies.

Belying its significance, the stele was not kept in a secure location after is discovery. It was stashed in a stable near the find site for years. That stable was its last known address when all records of its ceased in 1908. It was found again in the wall at a newly renovated home which had once belonged to Stamatis Gripsos, a shepherd from Nikouria. Perhaps he had access to the barnus delicti. The Nikouria decree will now be removed from the wall and moved to the Amorgos archaeological collection.