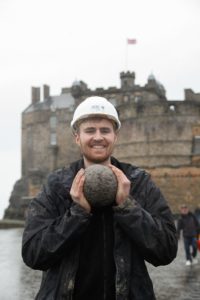 Archaeologists in Edinburgh have unearthed a stone artillery ball of the type launched from a trebuchet in the Middle Ages. The heavy sphere looks like a cannonball, only it is made of solid rock and was being hurled at castle walls 200 years before gunpowder reached Scotland. The type and size of the ball date it to the 13th century, a time when Scotland was under heavy assault by Edward I in full Malleus Scotorum mode.

The find was made in the Grassmarket area of Edinburgh’s Old Town where excavations are taking place in advance of construction of a new hotel. The neighborhood lies in a hollow below Edinburgh Castle, a prime location for a medieval catapult balls to settle into for hundreds of years.

There’s a candidate for the precise date when the ball was catapulted: the 1296 Siege of Edinburgh during the First War of Scottish Independence. This was the first major battle at the castle since it was built in the 12th century. For three days, Edward bombarded Edinburgh Castle non-stop using all the heavy artillery in his arsenal. This could be one of the many balls catapulted by Longshanks during the siege, or it could be one of the ones lobbed at him from the castle ramparts.

The siege saw Edward I capture Edinburgh Castle and hold it under English rule for 18 years, plundering treasure from across Scotland including the Stone of Destiny in the process.

John Lawson, City of Edinburgh Council archaeologist, said: “It looks like the type of ball which would have been fired by a trebuchet, one of the most powerful catapults used in the Middle Ages.

“Worldwide, the most famous account of a trebuchet is that of Warwolf, the giant catapult used by Edward I’s army at Stirling Castle in 1304.

“What we’ve discovered here suggests similar weapons were also used in Edinburgh, possibly even during Edward I’s Siege of Edinburgh in 1296, when the Stone of Destiny was stolen and the castle taken out of Scottish hands.

“We always knew this area of the Grassmarket could shed new light on Edinburgh in the dark ages, and here we are with the discovery of a medieval weapon. It’s a really exciting find, particularly if we can prove its links to the Siege of Edinburgh.”

The castle was besieged many, many times after the first big to-do, so determining with certainty when this one ball was launched is difficult (read nigh on impossible).