A recumbent stone circle in Aberdeenshire that has been known to locals since it was erected thousands of years ago has been identified and recorded by archaeologists for the first time. This type of circle, characterized by a large horizontal stone placed (hence “recumbent”) between two upright stones, is unique to northeast Scotland. They were built around 3,500-4,500 years ago and are well-known features of the landscape, which is why it’s so unusual to find one that has never been documented by archaeologists. If it had been in ruins, obscured by the landscape and hard to see on the surface it would explain how professionals didn’t know about it, but this one is complete, intact and perched on a well-maintained hill.

It stands on farmland in the parish of Leochel-Cushnie and it was a member of one of the families that have been farming in the area for generations, Fiona Bain, who alerted the Aberdeenshire Council’s Archaeology Service to the existence of the stone circle.

While fitting the Recumbent Stone Circle model, this is a slightly unusual example, they say.

Describing the monument, Mr Welfare said: “In numbering ten stones it fits the average, but its diameter is about three metres smaller than any known hitherto and it is unusual in that all the stones are proportionately small.

“It is orientated SSW and enjoys a fine outlook in that direction, while the rich lichen cover on the stones is indicative of the ring’s antiquity.”

Mr Ackerman added: “This amazing new site adds to our knowledge of these unique monuments and of the prehistoric archaeology of the area. It is rare for these sites to go unidentified for so long, especially in such a good condition.” 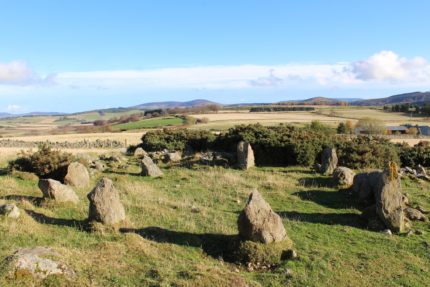