Here’s where I admit that yesterday’s post was a stealth preview of coming attractions, for today I went to the Clark and saw Brutus Condemning His Sons to Death in person. It’s in a small room just off the 18th/early 19th century French art gallery with the preparatory drawing and engraving that were part of the same auction lot with the painting itself. The oil painting of Brutus is hanging on the back wall, the focal point when you walk in or walk by the gallery. Against the left wall is the preparatory drawing; against the right wall is the engraving. 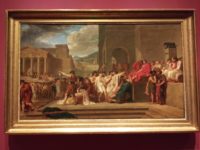 Meanwhile, in the main room of the French gallery, last year’s handsome young fella, Portrait of Achille Deban de Laborde (1817) by Alexandre-Jean Dubois-Drahonet, has been moved slightly a couple of spots away from its previous location. I approve heartily as it is now possible to take a picture head-on without the glare from the lighting. Last year awkward angles were required. 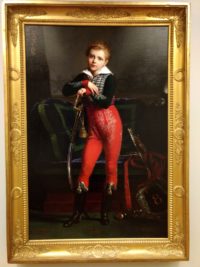 Last but certainly not least, I learned a new word today courtesy of the outstanding exhibition Turner and Constable: The Inhabited Landscape. As the name indicates, the show focuses on landscapes which both men painted with distinctive mastery. Unlike many other landscape artists, however, when JMW Turner and John Constable included people in their landscapes they did so with very deliberate meaning instead of as mere indicators of the scale and perspective. Using people in landscapes to indicate scale is called staffage, pronounced in French like stahf-AHJH. I did not know that. Be warned, I intend to put it to use in numerous tortured metaphors going forward.

Here’s an example from Constable. It’s called Ploughing Scene in Suffolk (1824-1825) and even though the human figures are small in the broad vista of farmland, they are absolutely pivotal to the theme. The position of one of them in the dead center of the painting underscores his importance, as does the care Constable took in depicting the plough in precise detail. Ergo, farmers ploughing are not staffage.