Archaeologists have unearthed an intact tomb from the 5th Dynasty in the necropolis of Saqquara that is replete with exceptional statuary and painted reliefs. Discovered 16 feet under a buried ridge, the entrance to the tomb was carved with a hieroglyphic inscription included the name and titles of the deceased: Wahtye, royal purification priest, royal supervisor, and inspector of the sacred boat under Pharaoh Neferirkare Kakai (reigned ca. 2446–2438 B.C.), the third king of the 5th Dynasty.

[Minister Khaled]Anany explained that the discovered tomb is exceptionally well-preserved and painted, with walls decorated with colourful scenes, showing royal priest “Wahtye” with his mother, wife and family as well as a number of sanctuaries with large colored statues of the priest and his family.

“It is the most beautiful tomb discovered this year” Anany said.

Secretary-general of the Supreme Council of Antiquities and the head of the excavation mission, Mostafa Waziri, said that the mission uncovered the tomb’s facade during its second excavation season in November, but was unable to enter it at that time because the doors were sealed.

Once past a narrow passageway, archaeologists entered a rectangular gallery 33 feet long, ten feet wide and just under ten feet high. Its advanced age is belied by the vivid color in the painted wall reliefs and on the many statues found inside the chamber. There are 18 large niches containing 24 painted statues of the priest and his family. On the lower part of the wall are 26 small niches with 31

statues of people standing or seated in the scribe position. They are all very similar, not to say identical, in facial features, so it’s possible they may represent a single individual, another priest or family member, yet to be identified.

In addition to statues and scenes depicting the Wahtye family, there are scenes of people engaged in their daily

As exceptional as the decoration and condition are, the tomb will likely stun us further. The last of the debris was removed from the main room of the tomb on Thursday revealing five shafts within. One of them was unsealed and empty. The other four are still sealed, shut tight against thieves and the elements for 4,400 years. Archaeologists hope to find cool stuff inside when they start excavating the shafts on Sunday, with one shaft looking particularly promising. 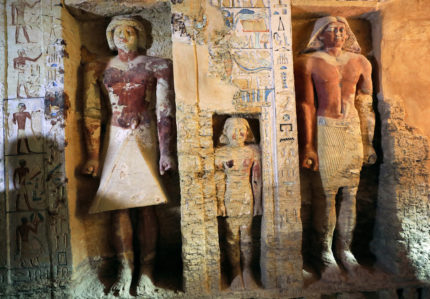