Dozens of dinosaur footprints from multiple dinosaur species, the most diverse group of Cretaceous fossils ever discovered in the UK, have been found near Hastings on the coast of Sussex. More than 85 footprints from at least seven species (there are 13 different shapes but some were made by the same species) were identified by University of Cambridge researchers between 2014 and 2018, exposed by erosion of the cliffs after severe storms.

The prints range in size from less than inch to 24 inches across. They date to the Lower Cretaceous, left between 145 and 100 million years ago by herbivores and carnivores alike. There are prints from iguanodontians, an ankylosaur, an unknown species of stegosaur, likely sauropods and theropods. They are in such exceptional condition that the shapes and textures of skin, scales and claws are visible to the naked eye.

Look at this amazing iguanodontian claw. It’s like someone took a plaster cast of the fellow’s toe to make a realistic prosthetic. 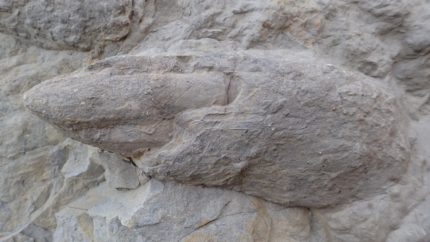 The Hastings area is famed for its fossils. The first Iguanodon was discovered there in 1825; more recently the first fossilized dinosaur brain tissue was found in 2016. It is one of the richest sources of dinosaur fossils in the UK, but fossilized tracks are rare. While some dinosaur footprints have been spotted along its cliffs before, none of them were this varied, complex and well-preserved.

Even though dinosaur footprints may not have the drama of whole-body fossils, they can give scientists a lot more information about the way dinosaurs actually lived and interacted than their mineralized bones alone can.

“To preserve footprints, you need the right type of environment,” said [study co-author Dr. Neil] Davies. “The ground needs to be ‘sticky’ enough so that the footprint leaves a mark, but not so wet that it gets washed away. You need that balance in order to capture and preserve them.”

“As well as the large abundance and diversity of these prints, we also see absolutely incredible detail,” said [study co-author Anthony] Shillito. “You can clearly see the texture of the skin and scales, as well as four-toed claw marks, which are extremely rare.

“You can get some idea about which dinosaurs made them from the shape of the footprints – comparing them with what we know about dinosaur feet from other fossils lets you identify the important similarities. When you also look at footprints from other locations you can start to piece together which species were the key players.”

The footprints have revealed new information. There are prints from a dinosaur species not previously known to have inhabited the area during the Lower Cretaceous. Researchers also find the imprint of small plants growing inside the footprints, evidence of how dinosaurs effected this environment, giving plants a nice, watery trough in which to grow.

The study has been published in the journal Palaeogeography, Palaeoclimatology, Palaeoecology.