Inmates from Pleven Prison in northern Bulgaria have unearthed a large hoard of Ottoman silver coins. The inmates were doing agricultural work on prison grounds on November 9th when they accidentally dug up some coins about a foot under the surface. The coins were cached in two large pots and buried in the 19th century. There are 7,046 of them weighing a combined total of 18.4 pounds. 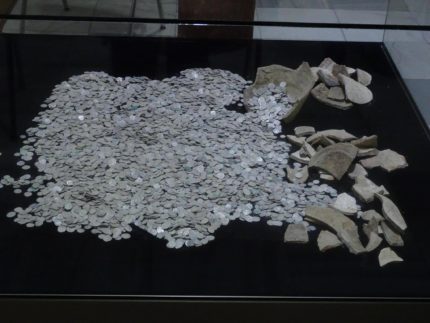 They are all Ottoman Turkish akçes, the chief monetary unit of the Ottoman Empire from the 15th century until 1687 when they were replaced by the kuruş. After that, the gradual devaluation increased to Weimar-like levels. By the time they were buried, an akçe contained a meager 0.048 grams of silver, a steep plummet from their original .85 gram content.

“They are from different coin issues, and of different face value, and they were probably collected over many years,” says archaeologist Vladimir Naydenov, as cited by the press service of Pleven Municipality.

“It is curious that at the time, this amount of money could buy three houses in Odrin [Edirne] (a former capital of the Ottoman Empire, and a major city in today’s European Turkey – editor’s note),” he adds.

“The 19th century is actually not that well known that is why the treasure is valuable as a source of historical information,” the archaeologist notes.

The experts from the Pleven Museum of History hypothesize that larger Ottoman coins might have also been buried where the hoard from the treasure pot was discovered. Yet, for the time being no more coins have been found at the spot.

This is the third time pots full of treasure have been unearthed in Bulgaria in this year alone. One was of 18th century coins, the other of Tartar loot from around 1400. Their coin counts were far lower but they also included jewelry.

The coins and pots are now at the Pleven Regional Museum of History where they will be thoroughly cleaned, conserved and restored. Numismatists will analyze them to identify with as much precision possible the date and location they were minted. They also hope to discover more about when they buried and why.