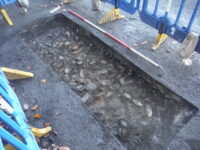 Remains of an important early Roman road in Northumberland have been discovered during water main work in Settlingstones. Northumbrian Water crews came across the a compacted layer of cobbles which the archaeologists observing the work recognized as the foundation underlay of the 1st century A.D. Stanegate road, Roman Britain’s first northern frontier.

“Here, the road was constructed using rounded cobbles set in a layer measuring around 15cm deep, with around 25cm of gravel surfacing laid on top.

“We are confident the remains identified form an important part of the early northern Roman frontier.

“There are strong indicators that the remains identified could have once been marched upon by Roman soldiers almost 2,000 years ago.”

The Stanegate was built between 77 and 85 A.D. to link the forts of Corstopitum (modern-day Corbridge) and Luguvalium (modern-day Carlisle), east to west along the northern frontier with Scotland. Between the two terminus points, the road also ran through the fort of Vindolanda, then in its first stage of construction with only wood structures, and Nether Denton.

Its original Latin name is unknown (Stanegate is Old English for “stone road”), but despite the lack of surviving documentation, the road was an important connector between the River Tyne and River Eden. It facilitated the movement of troops and supplies during the Roman push to conquer northern Britain, which reached its greatest penetration into Calendonia under governor Gnaeus Julius Agricola in the 80s A.D. The northern tribes eventually pushed the Romans into retreating back to the Stanegate line by 117 A.D. and new forts were added to add defensive strength to what was Britain’s first northern frontier. A new more intimidating boundary line was established when construction began on Hadrian’s Wall a few miles to the north of the road in 122 A.D.

While it was superseded as a frontier system, the Stanegate continued to be the major road in the area and the sole direct access to the forts and settlements at Hadrian’s Wall. It is documented as having been intact and in active use in the 7th century. It formed the foundation of a medieval built over it, but neglect led to its decline, and by the 18th century is was largely impassable to vehicular traffic. It was replaced by a new Military Road built after the 1745 Siege of Carlisle in the Jacobite uprising. The largest section of the Stanegate still surviving today runs from Fourstones on the River South Tyne to Vindolanda eight miles to its west.