An archaeological exploration of the Via Milano in Brescia before sewer works has discovered three ancient milestones from the late Roman period. Two of them take the standard form of the Roman milestone — cylindrical pillars– one 5’3″ and one 5’11”. The third is a column more than eight feet tall. All three of them are engraved with long inscriptions including imperial titles that are typical of milestones from the 3rd and 4th centuries.

The milestones were found seven feet under the surface. A fourth artifact — an intact altar with a dedicatory inscription — was discovered with them. Why they were all grouped together in one trench is unclear. It’s possible

that’s simply where they fell in antiquity, but unlikely. This could have been a temporary cache intended to be used in construction only to be forgotten. In the Middle Ages and early Modern period, ancient marbles were commonly ground up to make lime or otherwise recycled in construction. Archaeologists hope to expand the excavation area and answer the question of when they were placed there and why.

Similar milestones have been found in neighboring areas before, but these are the first ones discovered in the city of Brescia. Their epigraphy alone would make them particularly significant because it’s been years since any Roman inscriptions have emerged in Brescia, so finding four in one place, each of them monumental, was like hitting the archaeological lottery. 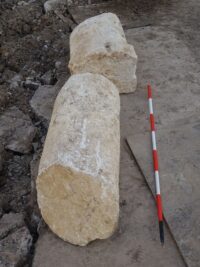 Funerary inscriptions found during previous roadworks led archaeologists to hypothesize that the modern-day Via Milano was built over an important Roman road leading in and out of ancient Brixia. (Roman cities typically used the roads out of town as necropoli because burial was forbidden within the walls.) One of the stones is engraved with the Roman numeral II, marking the spot two Roman miles (1.8 modern miles) from the city center. The discovery confirms the hypothesis that this was a major artery in line with the decumanus maximus, the main road leading to the very heart of the city, the forum.

The objects have been removed and will now be cleaned and conserved. They will then go on display, either in Brescia’s Santa Giulia archaeological center, or, if adequate space, security and visibility can be arranged, on the Via Milano where they were found. 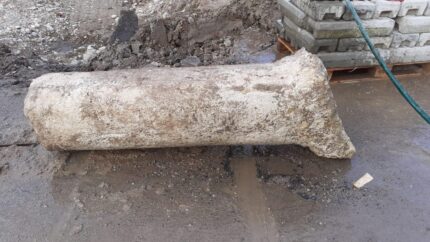