Two Tang Dynasty (618-907) tombs with surviving murals were unearthed in northwest China’s Shaanxi Province. Archaeologists from the Shaanxi Provincial Institute of Archaeology discovered the tombs last month in Buli Village, 25 miles from Xi’an, the capital of Shaanxi Province today and the ancient capital of China during the Tang Dynasty. The tombs are intact with inscriptions identifying the owners and the murals, while damaged, contain imagery that is extremely rare in Tang Dynasty art.

One of the tombs contained the remains of a Tang Dynasty official. The single-occupant tomb was made of brick, encircled by a ditch and sealed with soil. It is oriented north to south and is 140 feet long with a sloped passage leading into the burial chamber. Archaeologists have found 102 funerary figurines, most of them depicting riders on horses, some standing individuals placed in niches. 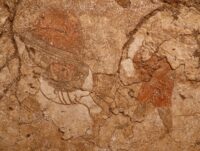 a blue dragon and a white tiger. Huren (a broad term meaning northern barbarians used by Chinese chroniclers to describe the nomadic peoples who were conquered and absorbed under the dynasty’s second emperor, Emperor Taizong of Tang (r. 626-649)) are depicted training horses and leading camels. Horses, canopies and attendants armed with bows and arrows follow. Below them are hunting hounds lying down, looking up at the caravan and running.

The quality of the painting is high with fine pigment and smooth brushwork. The people and animals are captured in dynamic movement. Horses and hunting dogs were very rare subjects for murals in Tang Dynasty tombs, and the epitaph explains their presence: the deceased, Kang Shanda, was the supervisor of horses under Emperor Gaozong (649-683). His father had held the same position and the family was very wealthy, rich in, the inscription says, cattle, horses and hidden treasures. He died in 671.

The second tomb is a joint burial of two royal family members. It is 110 feet long, north to south, cut out of the earth. The four walls of the chamber are decorated with murals. The raw soil walls were whitewashed and painted with scenes of feasting. One wall features dancers standing in the middle between two groups of musicians. Another mural features a table with dishes of food placed along it.

The epitaph identifies this tomb as that of Yang Zhishi and his wife from the Pangda family. Both the Yang and the Pangda families married into and were related to the imperial families of the Wu, Zhou and Tang imperial dynasties.

A mural depicting a scene of music and dance in the second tomb, owned by a royal couple, is in the typical style of the golden age of the Tang Dynasty.

The discovery of the two tombs has provided new materials for the study of murals and social customs at the time….