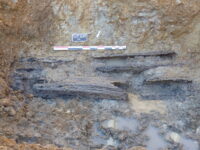 An archaeological survey in advance of real estate development in the Point du Jour area of Lyon has unearthed double wooden pipes from the ancient Roman Yzeron aqueduct. The excavation in the 5th arrondissement, Lyon’s westernmost neighborhood where the Roman city of Lugdunum was founded in 43 B.C., revealed the remains of two parallel pipes installed at the bottom of a ditch more than nine feet deep and more than 13 feet wide at its opening. The wooden pipes were broken by modern construction, but the surviving sections add up to a total length of 80 feet.

The conduits were made from large oak trunks. The trunks were hollowed out creating a trapezoidal void six inches in diameter. This would have allowed a large volume of water to pass through. The pipes were installed on a slight slope from west to east into the city. They were encased in clay to make them as watertight as possible. Once the pipes were installed, the ditch was backfilled to pack them in safely.

Archaeologists found a coin from the Augustan era in the backfill, and radiocarbon and dendrochronological dating of samples taken from the pipes all confirm that the conduits were installed at the beginning of the 1st century. The date, west-east orientation and the route the pipes take identify then as part of the Yzeron aqueduct.

The aqueduct carried water from a basin of the Yzeron river about 12 miles southwest to the ancient city of Lugdunum, modern-day Lyon. Begun around 9 B.C. in the reign of Augustus, it was the second of four aqueducts built by the Romans to supply Lyon’s water needs. The Point du Jour pipes may have been a provisional route into the city, or a diversion off the main canal or even a test run/prototype. 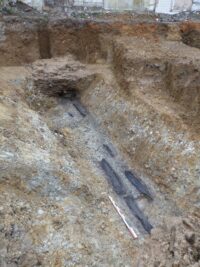 Whatever their purpose, the conduits didn’t serve long. A massive masonry stack nine feet square with more than five feet of its height extant was built in the filling of the ditch right smack on top of the double wooden pipes, destroying them. Archaeologists believe the masonry pile is the base of a pile of the Brévenne aqueduct whose remains have been found on both sides of the excavation. The Brévenne piers were built in this area in the middle of the 1st century.