The Antiquarium of Pompeii reopened today after an extensive refurbishment and decades of closure. You’d think a site like Pompeii which under normal global circumstances draws millions of visitors would have a permanent museum to house the thousands of artifacts unearthed there and the fragile plaster casts of Vesuvius’ victims, but   it hasn’t since the Antiquarium closed after the earthquake that devastated Naples in 1980, and even that iteration of it was hobbled because Allied bombing destroyed a whole gallery in 1943. After 36 years, the Antiquarium opened again in 2016 but only for a few temporary exhibitions.

The museum was launched in 1873 by Giuseppe Fiorelli, Pompeii’s pioneering director of works who was the first to cast the cavities in the ash left behind after the victims’ bodies decomposed. Amedeo Maiuri, director of works for almost four decades (1924-1961), expanded the Antiquarium early in his tenure.

The renovated museum harkens back to Maiuri’s concept for it. He was the first to dig below the Vesuvian layer to explore Pompeii’s pre-79 A.D.

history, and the new exhibitions are arranged sequentially to tell the full story of the city, from its earliest antecedents during the archaic period (7th-6th century B.C.) to its tragic demise. The 11 galleries are divided into six sections — Before Rome, Rome vs. Pompeii, Pompeii is Problematic, All Italy, Starting from Scratch and the Last Day.

Artifacts on display include little-known objects dating to the Samnite era (4th century B.C.) and iconic discoveries like the frescoes from the House of 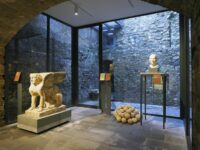 the Golden Bracelet, the treasure of silverware discovered in the country villa in Moregine a third of a mile south of Pompeii and the triclinium from the House of Menander. Some of the newest finds are also exhibited, like the collection of amulets from the House with a Garden and the most recent plaster casts of victims, two human and one equine found in the villa of Civita Giuliana.

The re-opening of the museum after so many decades of travail is “a sign of great hope during a very difficult moment,” Pompeii’s long time director, Massimo Osanna, said. He was referring to the harsh blow that the pandemic’s travel restrictions have dealt to tourism, one of Italy’s biggest revenue sources.

On display in the last room of the museum are poignant casts made from the remains of some of Pompeii’s residents who tried to flee but were overcome by blasts of volcanic gases or battered by a rain of lava stones ejected by Vesuvius.

The redesigned museum will now be the first stop for visitors to the Archaeological Park of Pompeii.