A neckerchief found inside a 19th century shipwreck at Muriwai Beach, West Auckland, New Zealand, has been restored and found to be replete with Masonic symbols. The neckerchief was discovered in the bilges of the wreck of the Daring, a New Zealand-built two-masted schooner that was dashed on the shore in an 1865 storm.

Built in 1863 in Mangawhai, the Daring is New Zealand’s oldest ship (six years older than the Cutty Sark) and is almost completely intact. It was made of local native woods using techniques not used anywhere else and is of invaluable significance as a unique survival of 19th century New Zealand shipbuilding.

The remains of the 55-foot schooner was exposed by shifting sands on May 27, 2018, and souvenir hunters had had their way with it even though public access to the beach is prohibited because it is part of military air weapons range. Within two days of its discovery, the ship was cordoned

off for its protection and archaeologists surveyed it. Seven months, reams of paperwork, 24/7 security, several heavy trucks and one million dollars later, the wreck was raised and moved to a more secure location for stabilization. 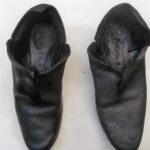 Artifacts recovered from the wreck include a pair of pristine leather shoe, coins, clay pipes, a cup, wine bottle caps, a partial leather belt with buckle, parts of a straw hat, comb and one wadded up grey ball that turned out to be the neckerchief. Cleaned of the muck and dried out, the textile revealed itself to be made of pure silk and festooned with Masonic symbolism in cloud-like medallions against a crimson background.

Masonic symbolism overlaps significantly with religious — Jewish and Christian — iconography as its rituals and imagery were heavily influenced by Kabbalistic mysticism as well as the Hermetic Christian tradition. Those types of images are rife on the neckerchief.

There’s a seven-branched candlestick, each candle alight. In Freemasonry, the menorah represents the mysticism of the number seven, the spiritual energy that radiates from the center of the world east to west, north to south, zenith to nadir. At ceremonies it is lit in a spiral clockwise from the outside in (1-7-2-6-3-5-center candle) or the reverse (counterclockwise from the center candle out) to charge the energies of the lodge brothers.

Another Jewish symbol, the hexagram aka Star of David, formed from two superimposed triangles, is intertwined with a third triangle to create a nine-pointed star, a symbol of 4th Degree Scottish Rite. And while it looks like a Greek temple, Solomon’s Temple makes an appearance too, identifiable from its checkerboard floor and the

initials J and B, for Jachin and Boaz, the name of two pillars at the Temple’s entrance, flanking it. Above it is the Blazing Masonic Star, symbolizing the zenith of the Mason’s journey. Underneath it is a laurel branch, symbol of peace.

The most well-known symbol of Freemasonry, the Square and Compasses.

The G at the center, a reference to the unpronounceable name of God, is in this example encased in a six-pointed star. It invoked the protection of the Almighty against all evil spirits.

On the Christian side of things is a rose and cross, reference to Rose Croix, a nickname for Scottish Rite Freemasony in England and Wales. The pelican in its piety, a popular medieval motif symbolizing Christ’s sacrifice, is faded

but clearly identifiable from the long curved neck of the bird as it pierces its own breast to feed its young in the nest. A lamb lying on a book with seven seals dangling off its top cover. This is the Agnus Dei, the Lamb of Christ, sits atop the Book of Revelation which is adorned with the Seven Seals that only Christ can break at the end of the world.

Other assorted symbols include crossed Masonic gavels, emblematic of the authority of the Master in every Lodge, a Masonic handshake, a cockerel, symbol of Mercury, the key transformational catalyst in alchemical reactions and a Masonic metaphor for the initiate’s transformation from base human to enlightened Mason, and a shield with the initials A.L.G.D.G.A.D.L., which stands for À la Gloire du Grand Architecte de L’Univers (to the Glory of the Grand Architect of the Universe).

The ship will become the centerpiece of a new building at the Mangawhai Museum, close to where the Daring was built in 1863. The artifacts found inside it will also be part of the exhibition.