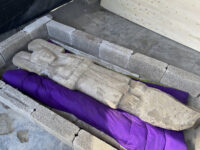 On New Year’s Day, 2021, a farmer in the village of Hidalgo Amajac, in southeastern Mexico’s Veracruz region, unearthed a six-foot statue of a female figure in a citrus grove. On Monday, January 4th, archaeologists from the National Institute of Anthropology and History (INAH) identified it as a pre-Hispanic statue of an elite woman, the first of its kind ever discovered in the area.

The limestone statue depicts young woman, elegantly garbed in a long-sleeved shirt and ankle-length skirt and adorned with an elaborate headdress rising high on both sides of her head. Her small face has hollow eyes that would originally have contained stone inlays. She wears a wide necklace with an engraved donut-shaped pendant known as an oyohualli, a fertility symbol.

It is two feet wide at its widest point and about 10 inches thick. It has survived the centuries in good condition, its features still sharp and complete with its spike, a long tapered structural element extending out from under the feet of the figure that was used to keep the statue upright. Most of the female Huastec sculptures have been interpreted representations of the earth and fertility goddess Tlazoltéotl, but INAH archaeologist María Eugenia Maldonado Vite this figure’s posture and attire suggests that she may have been a ruler rather than a deity. 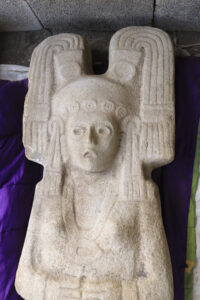 The location of the statue in the Tuxpan River valley and its general stylistic features indicate it was made by the Huasteca culture, indigenous to the Veracruz region, but there are some elements typical of Central Mexican Nahua sculptural tradition, namely the inlaid eye sockets and the knots and ribbons in the woman’s gown. Huasteca sculptures of female deities have smooth gowns. Given this combination of elements, INAH archaeologists’ date the statue to the Late Postclassic period (1450-1521 A.D.) when the Mexica Triple Alliance (aka the Aztec Empire) governed the Valley of Mexico and had cultural and commercial exchanges with the Huasteca peoples to the southeast.

The sculpture’s find site has not been excavated yet, but inspection revealed that it was inside an extensive archaeological site. There do not appear to be any monumental structures. The buildings are low and were probably residential in nature. The statue was found upside down, so archaeologists believed it was quarried from its original site in pre-Hispanic times and recycled as construction material.

The discovery sheds new light on the sculptural traditions of the region, how they were influenced by the Mexica and representations of women in Late Postclassic Huasteca art. The statue has some attributes seen in the Huasteca goddess figures — the headdress, the meeting hands, the oyohualli — but is missing other important ones — nose rings, spindles with cotton tassels, the chewing of chapopote (bitumen). In the wake of this find, reexamination of other Huasteca female figures assumed to be deities may be reinterpreted as women of status in the community’s political structure.