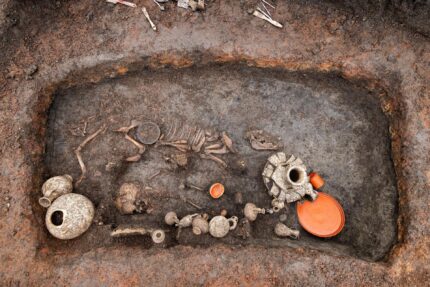 A Gallo-Roman grave of a child buried with a puppy has been discovered in Aulnat, central France. Excavation at a site slated for  airport expansion unearthed the grave was found on the perifery of a settlement from the Gallo-Roman era. It dates to the first third of the 1st century A.D., the reigns of emperors Augusts and Tiberius.

The child was only one year old when he died. He was buried in a fitted wooden coffin about 32 inches long. The wood has long since rotted away, but the nails that held together and an ornamental iron plate have survived to attest to its structure and design. The casket was placed in a large pit (6.5 x 3.3 feet) and surrounded with a remarkable array of objects and offerings.

About 20 terracotta containers were placed around the coffin and on top if its lid. They were offerings that would have held food and beverages for the deceased’s funerary banquet. The remains of a pig cut in half lengthwise

found inside the pit were part of that final banquet, as were three ham shanks, one pork butt and one ham. The remains of two hens with their heads cut off (not present) were in the grave.

Miniature vases and two glass balsamaria likely held unguents or medicines. They are currently undergoing chemical analyses to identify any residues inside the vessels.

The child’s most valued belongings were buried in the grave, one typical of any Roman-era graves: a copper alloy fibula used to pin clothing together. Another is a poignant testament to the child’s all-too-brief life: an iron circle and a bent rod believed to have been a hoop game. The circle was rolled along the ground using the rod to keep it running and vertical. It was found leaning against the coffin.

A puppy was placed at the feet of the deceased, one end of the iron hoop rod between its legs. The puppy was a beloved pet, as evidenced by his snazzy collar covered in 15 bronze appliques and one bell.

Last but not least, a single baby tooth lovingly placed on a shall was deposited in the grave. Archaeologists hypothesize this may have been the offering of an older brother or sister of the deceased.

This is an extremely rare burial for a toddler in the Roman era. With child mortality so high, children who passed away this young were usually buried informally, not in the community cemetery and not sharing the

funerary practices their older relatives would. At this time and place, the dead were typically cremated. This baby was inhumed, probably near or on his home, but the richness of his grave furnishings, the lavish offerings, the high quality and quantity of vessels, animal remains and personal belongings are exceptional. Nothing like them has been found before in the graves of Gallo-Roman children in the region. The second most furnished child grave on the record had only 10 vessels and two small pieces of butchery. It is clear that this child came from a very privileged family.