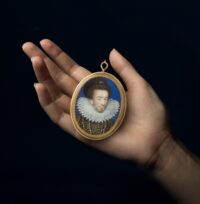 A miniature portrait has been identified as a rare surviving image of King Henry III of France. Just over two inches tall, the portrait was billed as an image of Sir Walter Raleigh when it was sold sight unseen in the English countryside during lockdown last year. Conservators at Philip Mould & Co, a London art gallery that specializes in historical portraiture, identified the subject as Henry III.

When the frame was removed, experts found another notable name on the back of the portrait: Jean Decourt, in a contemporary annotation, perhaps an autograph by the artist himself, that reads “Faict par decourt 1578.” Decourt was a master miniaturist and in-house painter for Charles de Bourbon, Prince de la Roche-sur-Yon, in 1553 before going on to become court painter to Mary Queen of Scotts, widow of King Francis II of France, in 1562. He was in England in 1565-6 where he painted Queen Elizabeth I and her favourite, Robert Dudley, Earl of Leicester. He was appointed Peintre du Roi by King Charles IX of France after the death of François Clouet in 1572. 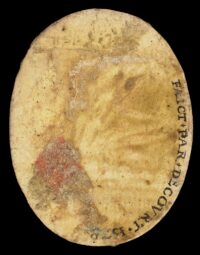 When Charles IX died of tuberculosis in 1574, he was succeeded by his 22-year-old brother Henry. As the fourth son of King Henry II, young Henry never expected to inherit the French throne. He had been deemed an excellent candidate for the throne of the Polish–Lithuanian Commonwealth, however, bringing French military and financial support to the table. Polish nobles elected him to the throne in 1573. He was crowned on February 21, 1574. His brother died without legitimate male issue in June. Not even six months after taking the throne, Henry ditched Poland and hightailed it back to France to claim the big prize.

He reigned for 25 years, impressive longevity in the turmoil and back-biting of the Wars of Religion. In the end, he had too many enemies to die in his sleep. He was the first King of France to be assassinated, stabbed to death in 1589 by a Catholic League partisan.

The life – and in particular, the sexuality – of Henri III has long been discussed and debated by historians. 16th century writers often referenced his fondness for wearing women’s clothing at court entertainments and for his male companions, dubbed at the time ‘mignons’, who slavishly copied the king’s dress. Indeed, the contemporary diarist, Pierre de L’Estoile’s (1546-1611) description of the mignons – who wore “their hair long, curled and recurled by artifice, with little bonnets of velvet on top of it like whores in the brothels, and the ruffles on their linen shirts [ruffs] are of starched finery and one-half foot long, so their heads look like St John’s on a platter” – could equally be applied to the fashions worn by Henri in this miniature.

It was also L’Estoile who commented on the king’s own fondness for cross-dressing: “The king made jousts, tournaments, ballets, and a great many masquerades, where he was found ordinarily dressed as a woman, working his doublet and exposing his throat, there wearing a collar of pearls and three collars of linen, two ruffled and one turned upside down, in the same way as was then worn by the ladies of the court.”

This delicate, sensitive and incredibly realistic likeness of Henri III contains all the hallmarks of Decourt’s style, in the extraordinary meticulousness of the details, the particular attention paid to the clothing, the jewels treated in volume with their cast shadows, the incredibly lifelike, modelling of the face (which is slightly pale) and in the artist’s habit of placing the reflection of light in the pupil of the eye, rather than the iris as Clouet did.

Researchers are following the trail of this extraordinary piece, trying to trace how a previously unknown royal portrait miniature wound up in England. One likely hypothesis is that it was spirited out of France during the Revolution, Pimpernel-style. Henry III wasn’t all that popular with royalists; he certainly wasn’t with revolutionaries, and very few of his portraits survived the anti-monarchical iconoclasm of the period.

Philip Mould is giving the Louvre first crack at buying the portrait which was likely painted in the Louvre itself when it was a royal palace.