Tiled pools from a Victorian-era bathhouse have been discovered under a parking lot in downtown Manchester, northern England. The excavation has revealed the first and second class bathing pools with their handsome white and blue tiles.

The site adjacent to Picadilly Railway Station, Manchester’s main railway station originally constructed in 1842, was home to the Mayfield Public Baths built in 1857 by the Manchester & Salford Baths & Wash-Houses

Company. The Mayfield neighborhood was known as Cottonopolis for its central role in Manchester’s textile industry. The baths provided entertainment, exercise and invaluable public hygiene facilities to employees of the print and dye factories, their families and neighbors, many of whom lived in grimy, overcrowded dwellings lacking in amenities. 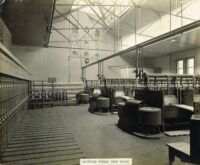 themselves and their laundry. The wash house, just as an aside, looked like the engine room of an ocean liner or something. Victorian laundromats were not here to play. In 1878, the city of Manchester acquired the Mayfield Baths and they remained integral to the live of Mancunian workers until they building was flattened in a bombing during the Blitz in 1940.

After the war, a parking lot was built on top of the bombed out baths. Nobody thought there was much of anything left under the rubble, so archaeologists excavating the site for the Mayfield Regeneration Project, the

conversion of the area behind Piccadilly Station into Manchester’s first new urban park in a hundred years, were surprised when they found the bathing facilities in such good condition.

Through machine excavation and meticulous hand digging, the team has uncovered the remains of two large tiled pools as well as parts of boilers, flues and pumps which were used to heat and circulate water around the pools and laundry rooms.

The archaeologists are using 3D laser scanning and low level drone photography to produce an  accurate, detailed record of the findings which will later be combined with historical documents and CAD software to produce digital drawings, in a process known as ‘preservation by record’.

“The Mayfield bathhouse is a fascinating example of the social and public health advancements that came about during the industrial revolution,” said Graham Mottershead, project manager at Salford Archaeology.

“As the city’s population boomed with factory workers, crowded and substandard living conditions gave rise to the spread of cholera and typhoid. For those living and working around Mayfield the Mayfield Baths would have been a vital source of cleanliness and hygiene.

“The sheer pace of change and innovation during the industrial revolution means many advancements were not recorded. Excavations like this help us to learn a great deal about what is arguably the most important period of human history and, in the case of Mayfield, a location that is so very relevant to the heritage of the people of Manchester”. 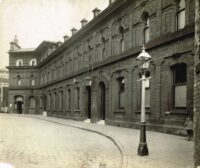 into a sustainable mix-used green space with homes, retail, leisure facilities, renovated historical structures and even a reborn river, the River Medlock, which was buried by development in the 19th century and has been hidden underground ever since. Artifacts recovered during excavations will go on display in the new park.