Pictish stones are usually abstract designs or animal figures that are stylized enough to look abstract to the untrained eye. That’s why they’re known as “symbol stones,” and why even experts don’t know what all of the symbols recorded from the 350 or so known Pictish stones represent. One theory is that they could be a sort of proto-heraldic assemblage identifying these large, imposing standing stones as the mark an important local family. 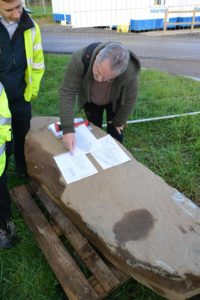 Roadwork on the A9/A85 highway in Perth, Scotland, has unearthed a Pictish Symbol Stone in which the symbol is a man, not a V-notch, not a circle, not something that could be an eagle if you squint at it long enough, but a clear outline drawing of a man carrying a spear in his right hand and a club or staff in his left. He is large and physically imposing and while he is wearing a cloak and shoes, the clothing is kept to a minimum in such a manner to emphasize his powerful glutes and quads. He is also sporting an unusual hairstyle: the front, and only the front, of his scalp is shaved. Other facial features have worn away, but from what little is left, it seems his nose was large and in charge.

There is no precise date for the stone as of yet. The spear he carries is of a type used in the middle of the 1st millennium A.D., which is a broad enough range to not tell us a great deal. If it’s actually 500 A.D., that is early for Pictish stones. There are no known Pictish sites in the area, which makes the discovery of this stone all the more significant. It may even refer to a specific local potentate.

A spokesperson for Perth and Kinross Council said: “The fearsome figure probably served to warn travellers and visitors that they were approaching his residence or territory.

“The study of the carving and what it can reveal about life in Pictish Scotland will continue. The Scottish Treasure Trove has been notified and the carving will be allocated to a museum in due course.

“After an inspection of the find spot, no further archaeological works were considered necessary and the roadworks have resumed.”

Mark Hall of the Perth Museum and Art Gallery was called in to the worksite when the stone was discovered. He documented it thoroughly in situ before it was removed and roadwork continued. The stone is now being kept at a mysterious undisclosed location where it will be studied and conserved while the Treasure Trove committee revs into gear and makes the decision everyone knows it’s going to make anyway. Obviously the ancient stone will be declared treasure. Then the only question is which museum will get to keep it.