Archaeologists excavating the remains of a Neolithic village in the South Caucasus about 20 miles south of Tblisi, Georgia, have discovered the earliest evidence of winemaking in the world. An internation team from the University of Toronto and the Georgian National Museum have been exploring two Early Ceramic Neolithic (6000-4500 B.C.) sites, Gadachrili Gora and Shulaveris Gora, and sent fragment of ceramic jars unearthed at the sites to specialists at the University of Pennsylvania for residue analysis. Using the latest and greatest technology available, a combination of Fourier-transform infrared spectrometry (FT-IR), gas chromatography-mass spectrometry (GC-MS), and liquid chromatography linear ion trap/orbitrap mass spectrometry (LC-MS-MS), and radiocarbon dating, researchers were able to confirm the presence of wine dating to 6,000–5,800 B.C. in the pots. That’s 600-1,000 years older than the previous contender, wine residue found in the Zagros Mountains of Iran.

The South Caucasus area was an epicenter of the transition from nomadic lifestyles to permanent settlements after the end of the last Ice Age. Now fixed in one place, people were able to grow their own food, planting grains and cereals like einkorn wheat and barely that are trendy again today as heritage foods. They also branched out from those staples, growing fruits, root vegetables, herbs, nuts both tree and legume. Among the fruits they cultivated was the wild Eurasian grape, domesticated during this period in Neolithic settlements and so successfully that it would become the progenitor of all 10,000 or so grape cultivars that produce 99% of the wine in the world today.

Finding ways to convert their crops into mind-altering substances was a natural next step, as was devising vessels in which to store, ferment and serve the harvest products. The firing of shaped clay to make pottery was invented during this period, the early 7th millenium B.C., for this very purpose. The huge jars found at Gadachrili and Shulaveris (or, more accurately, the fragments thereof) are examples of some of the earliest pottery ever made. Archaeologists believe they were used for all of the above purposes — storage of the grapes, fermentation into wine, aging into drinkable wine, and the moment everyone was doubtless waiting for, serving the wine. 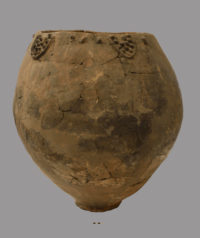 Their footprints and walls visible above-ground today, the mudbrick roundhouses of Gadachrili Gora and its next-door neighboor Shulaveris Gora were certainly inhabited by grape-loving people. Pollen and other traces of the prehistoric vines have been found in copious quantities. A large pot from this period discovered at a nearby site is decorated with grape clusters. Intact ceramic pots have not been found at the two sites that are the focus of the study. Pottery production was in its infancy. There was no large scale industry yet, and because these settlements were in continuous use for thousands of years, the pottery that has been found in excavations is fragmentary and scattered.

The team sought out the best examples of sherds from the 2012–13 and 2014–2016 dig seasons, pieces from the base have the most potential to contain residue accumulated over years of use. The final tally was six sherds from the bodies and 13 from the bases of 19 large jars. The pot fragments and samples of the soil in which they were found (to identify/rule out environmental or bacteriological contaminants) made their way to the University of Pennsylvania.

The researchers say the combined archaeological, chemical, botanical, climatic and radiocarbon data provided by the analysis demonstrate that the Eurasian grapevine Vitis vinifera was abundant around the sites. It grew under ideal environmental conditions in early Neolithic times, similar to premium wine-producing regions in Italy and southern France today.

“Our research suggests that one of the primary adaptations of the Neolithic way of life as it spread to Caucasia was viniculture,” says [Stephen Batiuk, senior research associate in the department of Near and Middle Eastern civilizations and the Archaeology Centre at the University of Toronto]. “The domestication of the grape apparently led eventually led to the emergence of a wine culture in the region.” 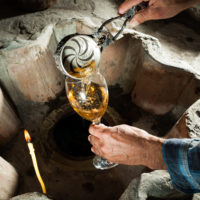 Batiuk describes an ancient society in which the drinking and offering of wine penetrates and permeates nearly every aspect of life from medical practice to special celebrations, from birth to death, to everyday meals at which toasting is common.

“As a medicine, social lubricant, mind-altering substance, and highly valued commodity, wine became the focus of religious cults, pharmacopeias, cuisines, economics, and society throughout the ancient Near East,” he said.

The results have been published in the Proceedings of the National Academy of Sciences and can be read online free of charge here.