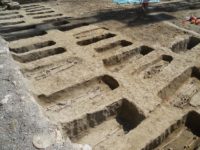 Bologna’s medieval Jewish cemetery has been rediscovered almost half a millennium after it was obliterated by order of Pope Pius IV. Unearthed between 2012 and 2014 during archaeological explorations of a site slated for housing development, the cemetery contains 408 graves, all aligned in parallel rows heads pointing to the west, and zero gravestones. It’s a miracle the former remained in any way intact considering what happened to the latter.

The discovery announced by the Bologna and was presented Tuesday at a news conference by Bologna Mayor Virginio Merola and other officials, including Bologna’s chief rabbi and Jewish community president.

The graves discovered included those of women, men and children, the regional superintendence for archaeology stated at a press conference Tuesday. Some had been buried with ornaments made of gold, silver, bronze, hard stones and amber, the superintendance [sic] said.

Pope Pius IV, canonized a saint by Pope Clement XI in 1712, would be appalled to hear any burials had been found unmolested and complete with grave goods. He certainly tried his utmost to ensure the opposite outcome. A zealot and ascetic who as a youth had eagerly worked as an inquisitor before being elected to the Holy Office permanently in 1550, Antonio Ghislieri rose in the ranks to become inquisitor general for all of Christendom in less than seven years. He was appointed by Pope Paul IV who, not coincidentally, was also a major proponent of the Inquisition and of an anti-Semitism so hateful and brutal that Hitler used his ghettoization system as a blueprint for his own.

When Ghislieri was elected pope in 1566, he picked up where his mentor had left off, rejecting the slight softening of the draconian anti-Jewish laws Pope Pius IV had attempted when he succeeded Paul IV. Pius V promulgated the Bull Hebraeorum gens sola on February 26, 1569, which opens with much the same gross nonsense Paul IV’s Bull had opened with:

“The Jewish people fell from the heights because of their faithlessness and condemned their Redeemer to a shameful death. Their godlessness has assumed such forms that, for the salvation of our own people, it becomes necessary to prevent their disease.” 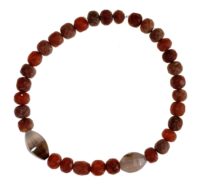 The forms in question were usury, helping thieves and robbers profit from their illegal activities (pawning, maybe?), and the worst crime of them all “lure the unsuspecting through magical incantations, superstition, and witchcraft to the Synagogue of Satan and boast of being able to predict the future.” They probably turned people into newts too, but their victims got better before trial.

The Bull concludes with the decree banishing all Jews from the Papal States, excepting those in Rome and Ancona, within 90 days. A convent in Bologna was explicitly instructed by to destroy the cemetery, the largest Jewish cemetery in the Europe which had been in continuous use since the 14th century, by the Pope later that year.

In November 1569, Pius handed over the cemetery to the nuns of the nearby cloister of St. Peter the Martyr and directed the sisters “to dig up and send, wherever they want, the bodies, bones and remains of the dead: to demolish, or convert to other forms, the graves built by the Jews, including those made for living people: to remove completely, or scrape off the inscriptions or epitaphs carved in the marble.”

Four ornate Jewish gravestones now displayed in Bologna’s Civic Medieval Museum are believed to have come from this cemetery.

Archaeologists found evidence of the sisters’ (or somebody’s, at any rate) handiwork in more than a third of the graves, 150 of which bear clear the tell-tale marks of deliberate, malicious desecration. The tombstones are simply gone. Destroyed so thoroughly as to not leave a trace, or employed in some other context where they are unrecognizable as anything but a piece of stone.

The human remains found in the graves will be given a respectful burial at a time and place yet to be determined.