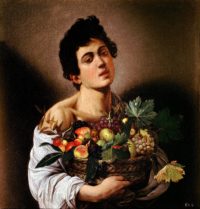 Giving them a break from the stifling heat, pain-lifting humidity and stench of humanity, the J. Paul Getty Museum in Los Angeles announced that they will be putting on a rare exhibition of three of the Borghese Gallery’s masterpieces by Michelangelo Merisi, the artist principally known as Caravaggio. The three pieces chosen for this rare departure to foreign climes are iconic: Saint Jerome Writing, also known as Saint Jerome in His Study, Boy with a Basket of Fruit and David with the Head of Goliath. The three works were painted at the beginning, middle and end of Caravaggio’s career, which makes them a great prism through which to view the artistic and personal shifts in the artist’s very turbulent life.

Boy with a Basket of Fruit (ca. 1593-94) represents the beginning of the artist’s career when he moved from Lombardy to Rome and first attracted attention as a painter of realistic genre scenes and still lifes. Saint Jerome (ca. 1605) portrays the saint as a scholar reading and annotating sacred passages in the dramatically spotlight manner that Caravaggio made famous. In David with the Head of Goliath (ca. 1610), painted at the end of the artist’s career in his more somber and expressive later style, Caravaggio included his own features in Goliath’s head, purportedly in penance for his having committed a murder in May 1606. All three paintings were acquired by Cardinal Scipione Borghese, a nephew of Pope Paul V, who knew Caravaggio personally and was one of his primary patrons.

“Caravaggio continues to exert tremendous influence on art today. His exceptional combination of truth to life and drama, and that famous chiaroscuro, gave birth not only to a new style of painting, but also inspired generations of painters with his psychological naturalism,” said Davide Gasparotto, senior curator of paintings at the Getty Museum. “These rare loans are prime examples of Caravaggio’s exceptional talent and innovation.” 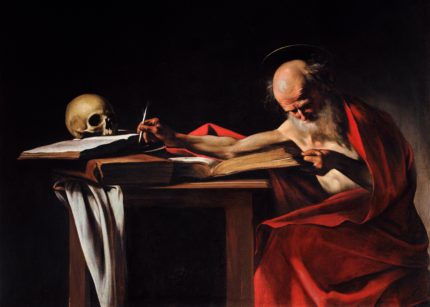 The loan is in aid of the Caravaggio Research Institute, a project that seeks to create a database of everything we know about Caravaggio and his work, an accessible digital reference constantly updated with the latest and greatest information from art historical research on the man to laser scans of paintings and everything in between. It will allow interested amateurs, scholars, curators, conservators, museums and other institutions to have a world of knowledge about Caravaggio at their fingertips, and for them in turn to contribute what they’ve discovered.

The project is sponsored by FENDI which somehow links it to the value of the Made in Italy brand. It’s a laudable goal that I hope to see succeed and become a standard for all researchers no matter what the subject, but how about they fork over some of the billions they make flogging logoware to fashion victims to FIX THE A/C IN THE GALLERIA BORGHESE?! Seriously it’s insane that the director of the gallery has a deep-pocketed sponsor for the research institute which is under no particular time pressure while the paint is literally peeling off the canvases in the museum itself.

Okay. Deep breaths. I’m good now, thanks. (Until the next time I recall the horrors I witnessed.)

The Getty has a pre-existing relationship with the Borghese Gallery, a fascination, even. In 2000 the Getty Research Institute (GRI) hosted an exhibition about how Prince Marcantonio Borghese IV made extensive alterations and renovations to the villa and rearranged its prized collection to turn it into a full-fledged public museum instead of a private house that allowed visitors the way it had been since Cardinal Scipione Borghese’s days. Marcantonio turned to architect Antonio Asprucci to turn his vision of the new museum into a reality, and they worked closely together on the project for two decades starting in 1775. Craftsmen, builders, painters, antiquities experts all dedicated themselves to this ambitious goal with an attention to detail that was recognized as an artistic achievement without parallel in its time.

It was enormously influential on museum design. The Louvre’s first ancient sculpture galleries were modeled after the ones at Villa Borghese and not in a coincidental way. In 1799, Napoleon hired antiquarian Ennio Quirino Visconti, the same person who had catalogued the Borghese sculpture collection, to organize the new statuary gallery of what was then called the Musée Napoleon, the first public museum in France which would open in the Palais du Louvre in 1803. Visconti consciously repeated what had been so successful at the Borghese estate: he tied the sculptures to the spaces they were in by creating ceiling and wall paintings on the same theme. Four years after what we now know as the Louvre Museum opened its doors, Napoleon made the reference to the great Borghese collection even more explicit when he strong-armed Marcantonio’s son Camillo Borghese, husband of Paolina, to sell him 300 of his family’s most important pieces which he then happily installed in the Musée Napoleon.

The GRI’s exhibition on the subject was the result of its acquisition of a group of 54 drawings, most of them by Asprucci involving their plans for the ground floor of the villa, that illustrate just how painstakingly detailed the Marcantonio/Asprucci renovation was. The drawings cover the imagery that helped create the thematic consistency between the objects on display and the villa itself, how it was to be decorated and furnished, how best to light it and how to display the statues to their greatest advantage. All that industry and dedication produced one of the great steps forward in museum design and the Borghese Gallery today is still largely arranged along the lines established by Marcantonio Borghese and Antonio Asprucci.

Caravaggio: Masterpieces from the Galleria Borghese opens at the Getty Center on November 21st and runs through February 18th, 2018. 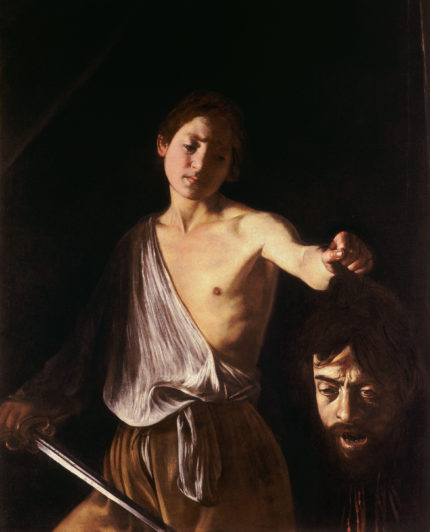