Guernica, Pablo Picasso’s monumental greyscale painting on the horrors of the Germano-Italian bombing of the eponymous Basque city during the Spanish Civil War, is a hard picture to get. For one thing, it’s so huge (26 feet wide, 11 feet tall) that fitting it in a single shot without skewing the perspective is a challenge. For another, there are serious condition issues because it was moved around so much over the decades before its final repatriation to Spain where it is now part of the permanent collection of Madrid’s Reina Sofia museum. A lot of flash photography and multiple shoots from all angles is contraindicated for its conservation.

I’ve encountered very few photos that can even begin to do this massive masterpiece justice. The best ones are all period taken by the surrealist Dora Maar in 1937 while Picasso painted Guernica in a frenzy of activity over less than a month. Eighty years later, her pictures were still the only ones worth looking at if you wanted to learn anything at all about the painting and the artist’s process.

That’s all changed, seemingly overnight to we civilians, but in truth it’s the culmination of years of work on the part of the conservators and researchers at the Reina Sofia. The museum has launched a new interactive website dedicated to the great canvas called Rethinking Guernica which features at its core a gigapixel image of the whole painting. Finally its giganticness is matched in pixels and viewers can get microscopically close to the tiniest speck of paint. Close enough to see brush hairs stuck in the impasto.

Hundreds died in an aerial attack on civilians that shocked the world and set a precedent repeated often by German and allied forces in World War II.

Picasso, then living in France, was commissioned by the struggling Spanish Republican government to produce a work depicting the bombing for the 1937 World Fair in Paris.

That commission and hundreds of other documents concerning “Guernica” are now available online for the first time.

They tell the story of a hugely well-traveled work, with stops in Scandinavia, Britain and the United States, where it spent decades on loan at New York’s Museum of Modern Art.

There are papers relating to its trip to Venezuela in 1948 that was cut short due to a coup d’etat, and a frantic telegram sent by MoMA collections director Alfred H. Barr Jr. informing the artist that his works were safe after a fire tore through the museum in 1958.

The gigapixel Guernica can be viewed in more ways than the glorious extreme closeup the high resolution makes possible. By clicking on thumbnails at the bottom of the main screen, you can switch from the visible spectrum view to ultraviolet, infrared and X-ray imaging. You can thank Pablito the robot for that, by the way. He kicked off the Guernica Project in 2011 by scanning every centimeter of the canvas with every imaging technique in the book. It took him a year to complete so detailed a job, working only at night so as not to disturb museum visitors.

The guided tour that the site directs you to when you first load it doesn’t explain a great deal that you couldn’t figure out on your own if you’re even remotely Internet-literate. The icons going down the right side of the screen, for example, are fairly self-explanatory. The square at the top means click for full screen; the + and – underneath mean zoom in and out; the ? opens up the guided tour again if you regret closing it. There are two site-specific icons on the list, however, and they are awesome. The horizontal arrow icon allows you to view the painting in two different imaging technologies side by side, which is extremely cool, while the zig-zag constellation icon pulls up an enormous density of information about the changes to the painting over time, both deliberate ones like Picasso’s deviations from his original prepatory drawings and circumstantial ones like holes, fissures and craquelure in the paint.

Lastly, whenever you click on the image it pulls up tons of content about the history, context, conservation record, damage, repairs, etc. The Reina Sofia conservators have done an exceptional job sharing the results of their years of study of the painting, from cutting-edge technological analysis to archival research. There are all kinds of side-avenues to pursue — biographies of people involved in the history of Guernica, primary documents like letters to and from Picasso about the painting, essays on the meaning of the work, on the Spanish Pavilion at the 1937 Paris World’s Fair where it was first exhibited, just to name a few.

“Guernica is a source of never-ending artistic material and it’s a privilege to be with as an art historian,” says Rosario Peiro, head of collections at Madrid’s Reina Sofia modern art museum. […]

“Putting all of this together allows you to rethink the history of the painting,” Peiro told AFP. 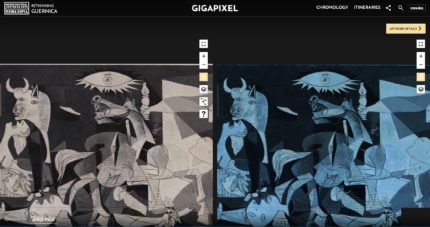