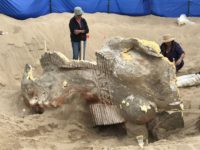 Archaeologists have unearthed another piece of colossal scenary from Cecil B. DeMille’s 1923 epic silent movie The Ten Commandments from the sands of the Guadalupe-Nipomo Dunes near Pismo Beach, California. At least one filmmaker, enthusiasts, nature conservancy advocates and archaeologists have been looking for the fabled set since 1982. DeMille claimed to have deliberately destroyed it after filming wrapped to keep it from being used by copy-cats to get their movies to look as good as his without having to spend the Croesonian budgets studios allowed him. He said he had it dynamited to smithereens and bulldozed the remains into a trench.

A few bits and pieces were indeed found by filmmaker Peter Brosnan in 1983, who had to do assiduous research to even find the general area where this landmark film was shot. While there was a small flurry of interest from the Hollywood community when the first discoveries were made, the next shiny thing came along to distract potential moneyed supporters and Brosnan spent the next 30 years looking for more of the set and trying to raise funds to finish a documentary about the search that he’d been filming since 1982.

In 1998, Brosnan’s organization teamed up with a nature preserve advocacy now known as the Guadalupe-Nipomo Dunes Center and together they were able to recover more pieces of the set. DeMille had not in fact dynamited it, it seemed. There would have been evidence of that in the fragments, damage, scatter pattern, etc. He just broke the whole thing down and buried it and then the harsh elements did the rest, turning all that plaster and balsa wood to dust. Leave it to him to spin a yarn featuring a big dramatic action sequence complete with pyrotechnics when describing striking a set.

The pursuit of the fabled lost land of Fake Movie Egypt picked up steam in the second decade of the 21st century. An archaeological dig discovered the head of one of the 21 plaster sphinxes (originally each one was 12 feet tall and weighed five tons even though they were hollow) that DeMille used to line the dramatic corridor leading to the main gates of “The City of the Pharaoh,” a vista he borrowed from the Avenue of Sphinxes that connects the temples of Karnak and Luxor. The archaeologists were not able to transport the head so they reburied it hoping the sands would preserve it, but the Guadalupe-Nipomo Dunes are not Luxor. They’re at the beach, after all, and there’s a saltwater marine layer that blocked the adhesion of the expoxy archaeologists had coated the plaster in for its protection. When they returned in 2014, the head had fallen to pieces. They were able to find another of the The City of the Pharaoh sphinx heads nearby that year, and that one was successfully recovered and conserved for display at the Guadalupe-Nipomo Dunes Center.

In October of this year, archaeologists finally returned to the site. (Funding in an unending migraine, hence the irregular digs.) The excavation was very brief, from October 23rd through November 4th, but the team made a big find even in that brief window: a 300-pound piece of the head of another one of the plaster sphinxes, the largest and best preserved yet.

“The piece is unlike anything found on previous digs,” said Doug Jenzen, executive director of the Guadalupe-Nipomo Dunes Center.

What makes the recent find significant is its size and how well-preserved researchers found it.

“The majority of it is preserved by sand with the original paint still intact,” Jenzen said. “This is significant and shows that we’re still learning unexpected facets to film historical movie production, such as the fact that objects in black-and-white films were actually painted extremely intense colors.” […]

The sphinx head, which is about 5 feet by 8 feet, is currently being stored so it can dry out for a few months before art restorers can get to work preserving the artifact.

“It”s 94 years old and has been buried near the beach for that long; it is wet. If you think of the drywall in your house buried for 94 years at the beach, that is the consistency of the material we are working with,” Jenzen said. 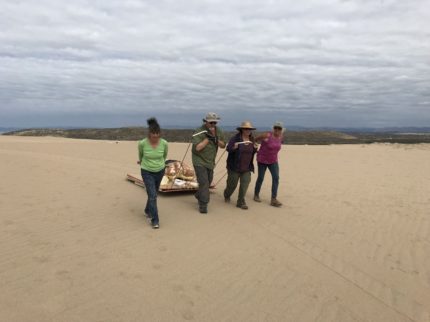