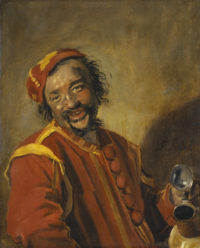 The Frans Hals Museum in Haarlem, northwest Netherlands, will tickle visitors’ funny bones with an exhibition dedicated to depictions of laughter in the paintings of Dutch Golden Age masters. The Art of Laughter: Humour in in the Golden Age is the first museum exhibition to treat the subject of hilarity in 17th century artworks with the seriousness it deserves. It’s the first show to focus on the topic at all, which is curious when you consider how rich a vein of it runs through the artworks of the period.

Frans Hals is often called ‘the master of the laugh’. More than any other painter in the Golden Age, he was able to bring a vitality to his portraits that made it appear as if his models could just step out of the past into the present. Hals was one of the few painters in the seventeenth century who dared portray his figures – often common folk – with a hearty laugh and bared teeth. Merriment and jokes are prominent features in his genre paintings; artists in the Golden Age frequently used it in their work. Now – centuries later – the visual jokes are harder to fathom. A great deal of new research into the field has been carried out, particularly in the last twenty years, and we are beginning to get an idea of the full extent of seventeenth-century humour. […] 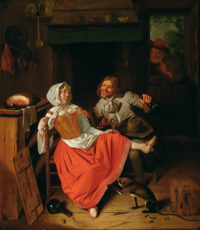 The exhibition showcases some sixty masterpieces from the Low Countries and beyond by Rembrandt, Frans Hals, Jan Steen, Judith Leyster, Adriaen Brouwer, Gerard van Honthorst, Jan Miense Molenaer and Nicolaes Maes. Works by these and other artists will be shown in the context of an introduction and seven specific themes, including mischief, farce and love and lust, and one room is devoted to each of them. The exhibition ends with the comical self-portrait, in which painters feature in their own jokes. Thus humour eventually arrives at the artists themselves, creating an intriguing finale. There will also be a small selection of joke books, incredibly popular in the seventeenth century, which confirm the reputation of the Dutch as an unusually cheerful and humorous people. According to an Italian contemporary, the writer Lodovico Guicciardini, who was living in the Low Countries at that time, the Dutch were ‘very convivial, and above all jocular, amusing and comical with words, but sometimes too much.’

I wonder if the Frans Hals Museum has detected any hidden poopers in the artworks on display. The Edwardian curators of the Royal Collection were not amused by the Dutch penchant for ribald humor as expressed in their Golden Age paintings. It’s funny to think of the vast chasm in curatorial outlook between the priggish post-Victorians and the modern Dutch who take such pride and pleasure in the joie de vivre evinced by their Old Masters, even to the point that they’ve thorougly researched the paintings so we too can get the jokes that viewers in the 17th century would have gotten at a glance.

The paintings on display are a deep bench, loaned from institutions all over the world. In order to defray the cost of shipment, insurance, installation and security, entrance to the exhibition will cost an additional €5 on top of the general museum entrance fee. It’s still a bargain, though, because one ticket to The Art of Laughter will also get you into the companion exhibition, A Global Table, which looks at Golden Age still lifes with their tables and sideboards groaning with food, as primary sources of information on the effect of the Netherlands’ colonial holdings and global trade network on how people ate back home.

One of the 53 paintings in the Laughter exhibition, Gerard van Honthors’ absolutely charming Smiling Girl, a Courtesan, Holding an Obscene Picture, which is totally a meme waiting to happen (suggested caption: “Guess what? THIS GUY’S BUTT!”), is still in the process of being moved from the Saint Louis Art Museum. It won’t get to Haarlem until the end of the month. For now, her mischievous grin is represented by a reproduction created by artist Rinus van Hall in 24 hours. Here’s a nifty time-lapse video of him at work: