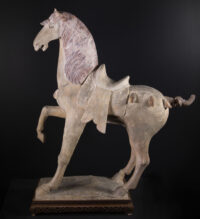 A tassel on the forehead of a terracotta Dancing Horse sculpture from the Tang Dynasty (618–907 A.D.) has been unmasked as an impostor, an error of restoration instead of an original design element. The horse has been in the collection of the Cincinnati Art Museum for 25 years, but the truth has only come to light now thanks to cutting edge analysis by scientists at the University of Cincinnati.

Donated to the Cincinnati museum by a collector in 1997, the dancing horse dates back to the Tang dynasty when such sculptures were commissioned for the express purpose of entombing them with royalty upon their deaths, [East Asian art curator Hou-mei] Sung said.

Dancing horses were trained to move in time with a drumbeat. Sung said Emperor Xuanzong from the eighth century loved horses so much that he had a stable of more than 40,000. For one birthday celebration, he invited a troupe of 400 dancing horses to perform the “Song of the Upturned Cup.”

“During the dramatic finale, one horse would bend its knees and clench a cup in its mouth and offer wine to the ruler to wish him longevity,” Sung said. “This became a ritual.”

The unfired earthenware horse is 26 inches high and 24 inches long and was made in the 8th century. It stands with one front leg raised in a prancing posture. He wears a small saddle with silk panels hanging down each side. His lush main is painted a reddish brown, as are nine tassels on draped over the horse’s haunches and shoulders, attached to a dark painted strap that had faded with time.

Then there is the tenth tassel, with the same curling pattern and reddish-brown pigment as the others, only this one is mounted to the front of the horse’s head as if it were a unicorn horn. Other Tang Dynasty dancing horses have decorative tassels too, but none of them are on the forehead.

The horse’s conservation history is writ all over its body. It has suffered multiple breaks and repairs, and conservators have long suspected the anomalous placement of the tassel on the forehead was a restoration artifact rather than an atypical original design element. Sung sought out the aid of UC College of Arts and Sciences assistant professor of chemistry Pietro Strobbia to investigate the origin of the tassels.

To answer some of the fundamental questions about the piece, the museum agreed to allow UC’s Strobbia and collaborators such as Claudia Conti at Italy’s Institute of Heritage Science to take 11 tiny samples for analysis.

“We judged the risk was worth the reward to answer the question,” Rectenwald said.

Researchers deployed a battery of molecular, chemical and mineralogical tests of the masterpiece and its features using cutting-edge techniques such as X-ray powder diffraction, ionic chromatography and Raman spectroscopy. 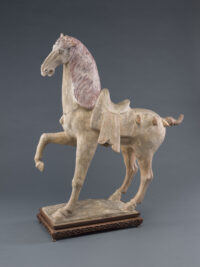 The testing found that the unicorn tassel was indeed not original. It’s not even terracotta. It’s made of plaster and was affixed to the horse with animal glue. Two of the other tassels were also later replacements, but are made of different materials and were affixed with different adhesives, so the three were each replaced during different restorations. When the forehead tassel was removed, the terracotta underneath it was smooth instead of scored, further evidence that it was not original.

The results of the investigation have been published in the journal Heritage Science and can be read in its entirety here. The de-tasselled horse will join its brethren from other periods at the Cincinnati Art Museum in Galloping Through Dynasties, an exhibition dedicated to the long history of the horse in Chinese painting, metalwork and sculpture. It runs from October 7th through January 1st, 2023.