A fallen marble lintel discovered on the Aegean island of Lesbos is carved with the sole known representation of the medieval castle of Agios Theodoros. The lintel was unearthed in an excavation of the foundations of the Byzantine gate it once topped near the castle’s southeastern sea wall. It dates to the 14th century. The castle was extensively reconstructed in the 15th century, so the carved image is the only illustration we have of what the castle looked like originally.

The white marble lintel is eleven-and-a-half feet long and is carved with the tetragrammatic cross (a cross with four betas in each corner), insignia of the Byzantine imperial Palaiologos dynasty, the coat of arms of the Genoese House of Gattilusio, the family cypher of the Palaiologi and, last but not least, the representation of a castle. The castle has a main gate and three rectangular towers on the acropolis (upper castle) which matches the descriptions of Agios Theodoros in written sources. 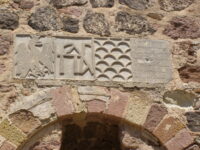 The only comparable architectural feature carved with signifiers of the ruling dynasties of Lesbos is a relief at the Castle of Mytilene with the Palaiologos cypher and the Gattilusio coat of arms. The relief has the eagle of Byzantium, however, and no castle.

The Gattilusi ruled Lesbos as vassals of the Byzantine Palaiologos emperors from 1355 to 1462. They had risen from obscure origins via piracy, helping John V Palaiologos, who had been mired in civil wars since childhood, retake his throne and Constantinople in 1354. He showed his gratitude by making Francesco Gattilusi the lord of Lesbos and marrying him to his daughter.