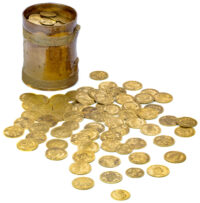 A couple in North Yorkshire hit the kind of jackpot every history nerd has dreamed of: they discovered an early 18th century coin hoard buried under the floorboards of their kitchen. With more than 260 gold coins dating to between 1610 and 1727, it is one of the largest hoards of English 18th century coins ever found.

They found the hoard in July 2019 after pulling up the kitchen floors in their 18th century home. Six inches beneath the concrete underfloor, they

spotted what they thought was an old electrical wire but turned out to be the mouth of a salt-glazed earthenware cup about the size of a soda can with a broken handle. Packed inside this smallish beaker were 264 gold coins.

The couple contacted the London auction firm Spink & Son and their experts authenticated the coin hoard. They also researched the home’s history and identified the likely hoarders: wealthy Hull merchant Joseph Fernley and his wife Sarah Maister. Joseph died in 1725, Sarah in 1745, so it seems Sarah buried the hoard after her husband’s death. Secure banks and paper money were available when she chose the floorboards over a safety deposit box — the Bank of England had been founded in 1694, the year Joseph and Sarah got married — but clearly they mistrusted financial institutions in favor of collecting and caching gold currency.

The Fernley-Maisters may have had some grounds for skepticism. The Bank of England was established in order to raise a loan of £1.2 million to the government of King William III so that he could build Britain into a global naval power capable of taking on the indisputably superior French fleet. France’s navy had defeated England in the Battle of Beachy Head in 1690 so soundly that it took control of the English Channel and caused a panic in Britain. The subscribers to the loan then became the Governors of the bank. For a family who built wealth by trading in goods imported from the Baltic, this probably looked like shenanigans were afoot.

The coins were well-circulated before they were collected and there is significant wear on most of them. They weren’t particularly rare either. It’s more like the collectors stashed their 50s and 100s regularly, including older ones they came across still in circulation. The rarest coin is a 1720 George I guinea which had two reverse sides (two tails, no head) because of a minting error. A 1675 Charles II guinea where the king’s name is misspelled CRAOLVS instead of CAROLVS is also notable. In face value alone, the coins are worth £100,000, but adding up their current individual market values that figure more than doubles to £250,000 ($290,000).

Unfortunately we will soon have a chance to know what price this unique hoard will go for because it is going under the hammer at Spink & Son on October 7th. Yes, the dream come true has turned into this history nerd’s nightmare. The hoard fell through yet another hole in the Treasure Act. By law, coins are declared treasure if there are two or more of them (check) and if they are at least 300 years old. The coroner’s inquest ruled that because the youngest coin was 292 years old when the hoard was unearthed in 2019, the entire hoard was less than 300 years old and therefore the property of the homeowners to dispose of as they wish. It’s heartbreaking, but every coin is being sold individually. No word on what’s happening to the earthenware cup they were stashed in.