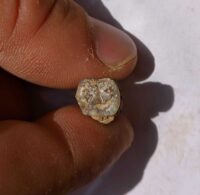 Archaeologists have discovered a 1.8 million-year-old tooth from an early species of human near the village of Orozmani, in Georgia. It is the fourth premolar of the mandible of what appears to be an adult most likely of the Homo erectus species.

The find site, about 60 miles southwest of Tbilisi, is only 12 miles south of Dmanisi where a series of 1.8 million-year-old hominin skulls were discovered in excavations between 1991 and 2005. The tooth now joins the Dmanisi skulls as the oldest hominin remains found outside Africa.

Excavations at Orozmani last year found bones of extinct animals, stone tools and lithic flakes dating to between 1.77 and 1.84 million years ago, but the tooth is the first human remains discovered at the site. The discovery confirms that this area of the South Caucasus was widely settled by Homo erectus groups as they migrated out of Africa to the Eurasia.

The latest discovery at a site about 12 miles away provides yet more evidence that the mountainous south Caucasus area was probably one of the first places early humans settled after migrating out of Africa, experts said.

“Orozmani, together with Dmanisi, represents the centre of the oldest distribution of old humans – or early Homo – in the world outside Africa,” the National Research Centre of Archaeology and Prehistory of Georgia said.

Giorgi Bidzinashvili, the scientific leader of the dig team, said he thought the tooth belonged to a “cousin” of Zezva and Mzia, the names given to the people whose near-complete 1.8m-year-old fossilised skulls were found at Dmanisi.

The family tree of the Dmanisi fossils is still subject of active debate. Originally believed to be a separate Homo species, they have now been classified as Homo erectus, but there are enough distinctions between them that paleontologists think they were part of an evolving lineage of the species.