Paleontologists at the University of Tübingen in southern Germany have discovered a previously unknown dinosaur species in the university’s Paleontological Collection. It is not a plateosaurus, as it was originally labelled, but a whole new genus and species:  Tuebingosaurus maierfritzorum. It is similar to long-necked herbivorous sauropods and lived 203 to 211 million years ago.

The specimen was unearthed in the Obere Mühle outcropping of the Trossingen Formation on the edge of the Swabian Jura near Tübingen in 1922. The hindquarters of a skeleton were found in the same geological layer as many specimens of a plateosaurus, a long-necked bipedal herbivore that roamed central Europe around 205 million years ago. Because of the other finds and because the taxonomy of this genus can be ambiguous to determine, the partial skeleton was also categorized as a plateosaurus and placed in storage in the Paleontological Collection of the University of Tübingen.

The university collection is one of the largest in Europe, but it has not been widely studied and given how much dinosaur classifications have evolved in the past decades, the specimens were in need of a new in-depth examination. Paleontologists Dr. Omar Rafael Regalado Fernandez and Dr. Ingmar Werneburg embarked on a large-scale project to re-examine all of the bones in the collection.

When re-analyzing a skeleton found in Trossingen in 1922, of which mainly the rear part of the body is preserved, Regalado Fernandez and Werneburg found that many bones did not correspond to those of a

typical plateosaur. The partial skeleton showed, among other things, a broader and more powerfully built hip with fused sacral vertebrae and unusually large and robust long bones – both of which indicate four-legged locomotion. This is in contrast to the plateosaurs, which also resembled the long-necked Jurassic sauropods, but were probably still bipedal.

After a detailed comparison of all anatomical features, the scientists reassigned the partial skeleton from Trossingen to the dinosaur family tree and found that they had discovered a previously unknown species and genus. Tuebingosaurus maierfritzorum was most likely already a quadruped and therefore much more closely related to the large sauropods that appeared later, such as Brachiosaurus or Diplodocus , than to the plateosaurs. The surrounding sedimentary rock and the preservation of the bones suggest that the found Tuebingosaurussank in a swampy area and died. The bones on the left side of the body were probably exposed to the elements on the surface for a number of years.

“Its genus name, Tuebingosaurus , is a homage to our beautiful university town and its residents,” says Werneburg. The species name maierfritzorum is used to honor the two German zoologists Professor Wolfgang Maier from Tübingen and Professor Uwe Fritz from the Senckenberg Natural History Collections in Dresden.

All of the parts of the skeleton, previously stored separately, have now been reunited and are on view in two display cabinets. The study has been published in the journal Vertebrate Zoology and can be read in its entirety here. 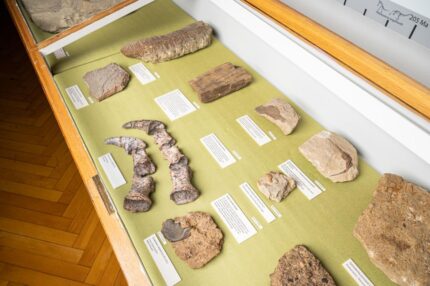