In an archaeological first, a decorative bronze wall plate has been discovered intact in a castle of the Iron Age Urartu Kingdom in eastern Turkey. While other bronze wall plates have been found before, they were all in fragments. This is the only known example discovered complete and intact, with only a few small chips missing on one corner.

The plate was found in an excavation of the Ayanis Castle, the royal palace built by Urartian King Rusa II (r. ca. 680-639 B.C.) overlooking Lake Van. It is

a concave square with a small square cutout in the center and teardrop cutouts in each corner. The center square is surrounded by a circular collar filled with a nested chevron pattern. Four symbols that look like bubble letter versions of pi link the teardrops and the chevron circle. The concave outer edges of the plate are bordered with double incised lines.

It would originally have been mounted on a wall through the cut-outs, one of many rich architectural embellishments that adorned the castle walls. Archaeologists found it inside one of four interconnected rooms unearthed in this season’s dig.

[Lead archeologist, professor Mehmet] Işıklı, who is also an academic at Atatürk University, said his team encountered very surprising findings at this part of the castle dig site.

“There are rows of interconnected room groups … Many findings, particularly ceramics, were uncovered in the rooms. Numerous groups of wooden structures were also found. These provide us with important information on the details of the Urartian architecture, but we haven’t yet determined what the rooms were used for.”

The Urartu Kingdom ruled the region around Lake Van in the Armenian Highlands between the 9th and 6th centuries B.C.  Ayanis Castle is one of the best preserved Urartian sites surviving today. Made of mud brick decorated with deep carvings, intaglio stone and alabaster inlays and cuneiform inscriptions on its walls, it was the last major construction of the kingdom before its decline and conquest by the Medes in 590 B.C. 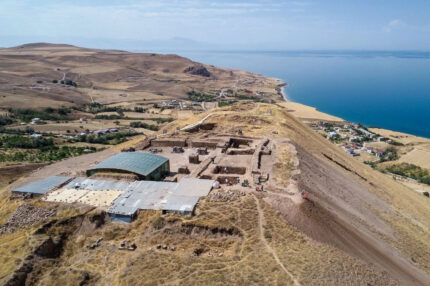