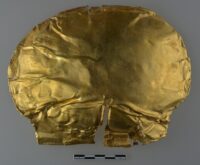 The mask was found in a tomb in the mid-Shang Dynasty cemetery in the southeast section of the archaeological site. It was one of more than 200 funerary objects in a large tomb belonging to a Shang Dynasty noble. At 10,000 square meters, the tomb was about the size of a New York City block and the artifacts it contained are the highest in quality and variety of all of the tombs excavated

in the cemetery. They include 20 bronzes, 11 jade objects, five gold artifacts, 50 arrowheads, more than 120 shell coins and plaques of gold foil inlaid with turquoise.

The mask is 7.2 inches long, 5.7 inches wide and weighs 40 grams (1.4 ounces). It would have covered the entire face of an adult, unlike the Sanxingdui gold mask which has large areas of negative space. Archaeologists believe that the full coverage mask was an expression of the Chinese religious concept that gold granted total protection to the body, ensuring the energy of the spirit could not be scattered.

The discovery suggests the belief in the “invincible golden body” goes back at least to the Shang Dynasty, even though very few gold objects have been found at Shang sites. The only other gold find of note at Zhengzhou outside of the newly-discovered tomb was a thin piece of gold foil unearthed from a pit containing the remains of sacrificed dogs at the eastern end of the north city wall. A dragon pattern on the surface is all that remains of an inlaid decoration.

Archaeologists are now investigating whether the gold culture of the early Shang Dynasty spread from the Central Plains southwest to the Sanxingdui site, evolving there into the enormous quantities of heavy, large, artfully-worked bronze and gold artifacts recovered from the sacrificial pits.

Chen Lüsheng, a renowned museologist and researcher at the National Museum of China, told the Global Times that the tomb is a significant find for research into the burial rituals and systems of the Shang Dynasty, and because it dates back to a very early period during the dynasty, it can provide new insight into the origins of Chinese civilization. 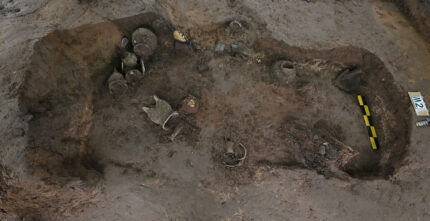