A Late Roman writing set has been discovered in Istanbul. Complete with a bone dip pen, a small shallow dish and a miniature amphora inkwell, this is the first intact ancient writing set ever found.

The set was unearthed in an excavation of the Bathonea Archaeological Site in the Küçükçekmece suburb of Istanbul. It is about 1,600 years old and analysis of the bone pen found traces of red and black ink. Red ink was exclusively the preserve of state officials in the Eastern Roman Empire. 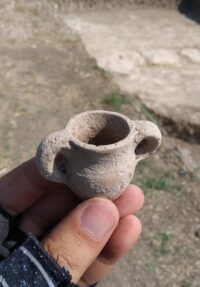 Bathonea was an ancient Greek harbor town founded in the 2nd century B.C. on the shores of the sea of Marmara. Today the archaeological site touches the waters of Lake Küçükçekmece and there are more remains inside its waters, including a Roman-era lighthouse. Previously excavated in the 1930s but misidentified as another city, the ruins of Bathonea were rediscovered in 2007 when a drought lowered the level of the lake. Since excavations resumed in 2009, archaeologists have discovered two harbors, canals built out of large stone blocks, wide paved streets on a planned grid pattern, a Greek temple, a Byzantine church, an early Christian cemetery, an open cistern and a multi-building complex that was a grand villa or palace.

A large number of artifacts recovered there date to the 4th-6th centuries A.D. when Constantinople, less than 15 miles away, was founded and rose to dominance as the capital of the Eastern Roman Empire. It’s not clear how Bathonea related to Constantinople. It could have been a simple satellite port handling some of the massive maritime traffic traveling to and from the capital, or perhaps a protected harbor for the imperial fleet since the lake is deep enough for large ships. 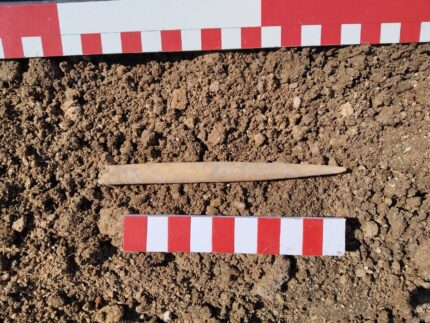