A group of tombs of elite craftsman of the Wari culture has been discovered at the Castillo de Huarmey archaeological site on the northern coast of Peru. More than a thousand years old, these are the first graves ever found of elite Wari artisans and they confirm the importance of Huarmey as an administrative and cultural center.

Seven burials were found inside adobe brick tombs, four of adults (two men, two women) and three adolescents, interred with hundreds of tools and materials they would have used in their professional lives. There were also textiles, wooden objects and painted leather that were still works in progress at various stages, further evidence that the deceased were craftspeople.

The primary burial is likely that of an adult man whose grave goods point to him having been a basket-weaver. He died around 1,300 years ago at the age of 40. His body was bundled in layers of fabric and buried with the tools of his trade: axes, knives, saws and the cane used to make baskets. There was also magnificent jewelry, including a gold headdress and a gold ear ornament inlaid with semi-precious stone. The other man and adolescents were buried alongside him. The two women were nearby. Archaeologists believe they may have all been related. 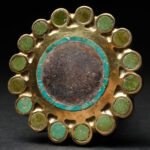 The artisans had to have been attached to the royal court. In 2010, archaeologists unearthed a royal mausoleum containing the burials of 1 queen, 57 aristocratic women, six human sacrificial victims and two guards whose feet had been amputated so they could never desert their post. The mausoleum held more than 1,300 objects made of gold, silver, bronze, gemstones, wood, bone, shell and painted ceramics. The tombs of the elite craftsmen were located just below the mausoleum, a step down from the royals in the hierarchy to be sure, but so high in status that it’s entirely possible that Wari artisans were either elite-born or able to reach the upper echelons of society through their work.

Based on our most recent findings, we could call this part of the royal necropolis “The Gallery of Elite Craftsmen”. For the first time, we have found the burials of male Wari elite, who were also fine craftsmen and artists. The golden and silver artifacts deposited with them support this assumption. This important discovery confirms our theories from previous field seasons: both men and women buried in the royal necropolis in Castillo de Huarmey were directly connected with the highest level of craft production and made the finest luxury goods of their era – [lead archaeologist Miłosz] Giersz explains to us.

All of these new discoveries confirm the important role of Castillo de Huarmey in the Wari Empire and reinforce the view that it functioned as the most important power, administrative and craft centre and a necropolis of the highest elites of the empire, being the most important complex during the Wari period in the Peruvian coast. In addition, Giersz comments that this impressive find occurred in the midst of an uncertain scenario, since for many years Castillo de Huarmey had been considered to be looted in its entirety by treasure hunters.